This book was an easy, inspiring read. I typed up all of my highlights from the book here.

If you want to be focused at work, you need to remove all distractions from your physical and digital workspace.

If you want to get creative insights, get out of town and relax for a day or two.

When you change your environment, such as surrounding yourself with different people, your thoughts and emotions change. 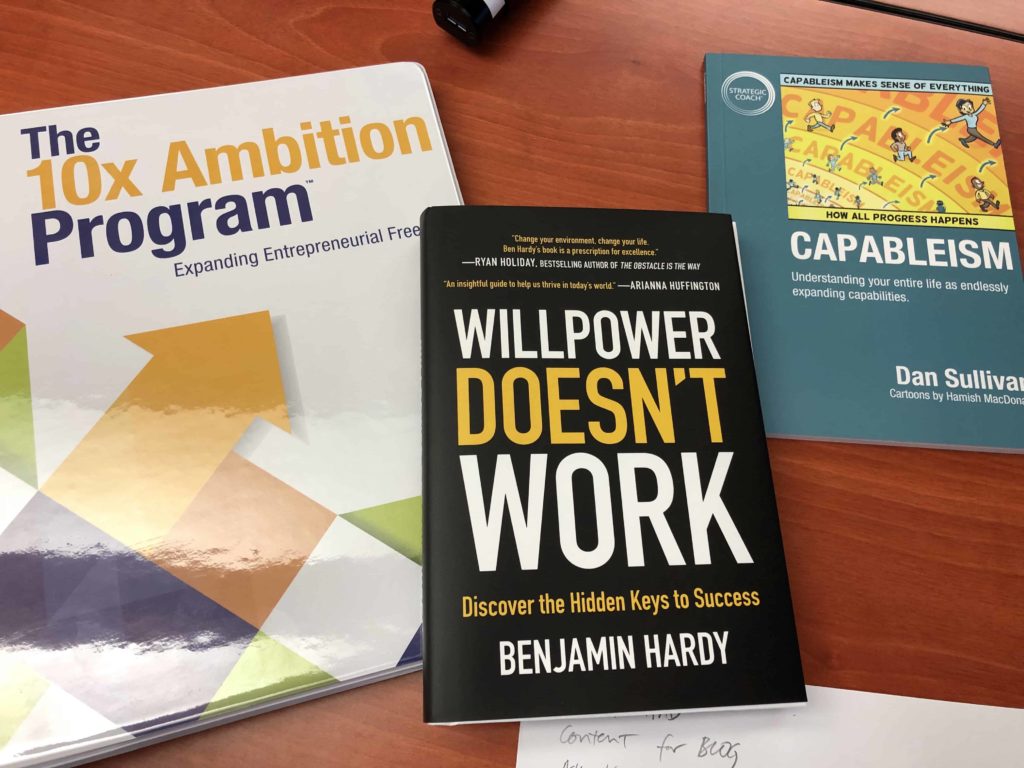 I usually read on Kindle, but after getting the “Willpower Doesn’t Work” book at a workshop I bumped it to the top of my reading list. Finished it on the flight home!

Most people reactively and mindlessly respond to whatever environments they find themselves in.

Your goals, beliefs, and values are shaped by the cultural context in which you live.

Crafting highly demanding situations and then mindfully adapting to those situations is the key to success.

“It is not the strongest of the species that survives, not the most intelligent that survives. It is the one that is the most adaptable to change.” Charles Darwin

Historian Will Durant concluded that: History was not shaped by great men, but rather by demanding situations. Necessity, he found, is the single most important ingredient in the formula for greatness.

Jim Rohn said that we are “the average of the five people you spend the most time with.” We are also the average of the five people each of our five friends spends the most time with. For example, if your friend’s friend gets fat, your chances of gaining unhealthy weight spike dramatically. This is called a negative secondary connection, and it’s often more dangerous than a negative primary connection because you typically won’t see it coming.

Your potential is shaped by what surrounds you. Every idea you have comes from what you’ve been exposed to. Who you become and what you do with your life are constrained by the people around you and the quality of information you consume. Garbage in, garbage out.

Tesla purchase example: “His investment in the car became a point of no return, heightening his commitment to his dream. By shaping his environment, he consciously created a self-fulfilling prophecy.”

“If you live with a lame man, you will learn to limp.”
Plutarch, the Stoic philosopher

It’s time to be the person you know you can be. The world needs you to rise up. Your situation is poised.

When you outsource your behavior to a goal-enhancing environment, desired behavior becomes automatic and subconscious.

The expectations of those around you establish your own personal rules and expectations. Psychologists call this the Pygmalion effect.

“Don’t join an easy crowd; you won’t grow. Go where the expectations and the demands to perform are high.” — Jim Rohn

The belief that you cannot change leads to a victim mentality.

Your addiction is a reflection of the environments and the relationships you’ve allowed to be built around you.

People mistakenly believe they must be fully qualified to take on a particular role. But this is false. You actually become qualified through the role itself.

Abraham Maslow described peak experiences as “rare, exciting, oceanic, deeply moving, exhilarating, elevating experiences that generate an advanced form of perceiving reality, and are even mystic and magical in their effect upon the experimenter.”

Get organized. Clear the garden of your life.

I’ve made the decision to never drink alcohol. I don’t look down on others who do. It was simply a decision I made that has simplified my life and continues to clarify my vision.

“Surround yourself with people who remind you more of your future than your past.” — Dan Sullivan

“In a few hundred years, when the history of our time wil be written from a long-term perspective, it is likely that the most important event historians will see is not technology, not the Internet, not e-commerce. It is an unprecedented change in the human condition. For the first time – literally – substantial and rapidly growing numbers of people have choices. For the first time, they will have to manage themselves. And society is totally unprepared for it.”

We should restrict the use of mobiles and laptops before sleep for sound mind and good health.

If I’m tempted to check my Instagram while working, then I’ll get out of my seat and do twenty push-ups.

About giving up an addiction: The void must be filled. You must be strategic about filling that void.

You need people around you to be strong on days that you are weak.

The most powerful forcing functions are:

A disorienting dilemma is when your current mental model is somewhat shattered through exposure to new ideas or experiences that contradict your current way of thinking.

Rather than “competing” with people at your perceived skill level, compete with those who are where you want to be. Always punch above your weight.

Research has found that getting consistent feedback is essential to effective learning.

“We are kept from our goal not by obstacles but by a clear path to a lesser goal.” — Robert Brault

Design Your World Through Who You Work With

Most people compete with others as their similar skill level. Most people collaborate with others in their same niche who have a similar background. Their world views are too similar to those around them to break the rules of the existing norms.

The Do You Know? Scale developed by Dr Duke and Dr Fivush to explore familial remembering.

I don’t believe I’m fixed. I’m not constrained by the environment I was once trapped in. I chose something different and to become different. And I will never stop evolving and changing.

No matter how “successful’ or “evolved” you become (or think you’ve become), it is essential that you don’t let it lead to egotism.

Your regular environment may be an unfathomable dream to most people. The work you do may impact millions of lives.

You are not the cause of your success. You are the product of your changing environment.

When you believe you are the sole cause of your success, you commit what psychologists call the fundamental attribution error. You attribute your success to yourself.

You should be in a continual state of humility and gratitude.

Happy Hour in London: All Fun And Games
Good CEO Book: The Outsiders
Hypatia and the Heathens
SideTour Shut Down by Groupon on June 1st, 2015
My Sister Emily's 30th Birthday Party
[VIDEO] Meow Wolf: My Favorites