This book scared us. It was a cautionary tale.

Our business book club read Losing the Signal: The Untold Story Behind the Extraordinary Rise and Spectacular Fall of BlackBerry, written by Jacquie McNish and Sean Silcoff. 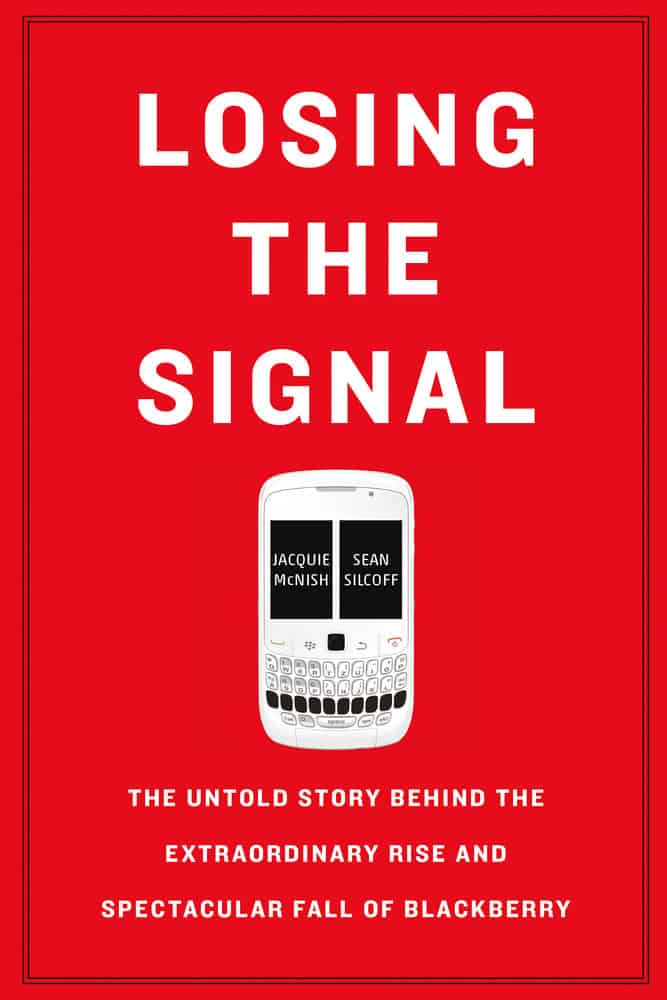 I really enjoyed the beginning chapters, recounting the early days of Research In Motion’s (RIM) early wins and battles with the likes of Palm and U.S. Robotics.

The story turns dark and unfortunate as the iPhone is released and Android handsets begin to sweep the globe. It is a scary example of the cutthroat nature of business, especially in technology companies.

Table of Contents hide
1 Business Book Club
2 The Early Days of BlackBerry and Research In Motion
3 Great Stories and Quotes
4 Co-CEOs: Good or Bad?
5 The Downfall
6 Trust in your gut… until you can’t
7 Discussion Questions
8 NPS and User Surveys
9 Open Questions
10 Conclusion

Wayne was hosting again in his Chelsea apartment lobby. We were treated to sparkling water, coffee, and tea selections.

This was the first time we had a special guest. Ben Casnocha was visiting from San Francisco. We all met him a few months prior at Ramit’s wedding. It was great to have an outside perspective and fresh voice in our group.

CALL FOR GUESTS — Female founders: Do you know or are you a female founder in NYC with at least $3m revenue or 20 employees? We’d love to have someone join our business book club as a guest. Please email me to say Hi!

Wayne Mulligan, our book club host this month, prepared a bunch of great discussion questions. Here are a few:

Previously, our book club has read these books: Measure What Matters, What Got You Here Won’t Get You There, Safari, and Netflixed.

The Early Days of BlackBerry and Research In Motion

Remember the glory days, when people printed their BlackBerry Messenger numbers on business cards and in email signatures?

Here are some photographs that I found online of the founders and their early hardware:

Anecdotes from the early days:

Ben and Steve in our book club wanted more stories of how the co-CEO dynamic worked between Mike Lazaridis and Jim Balsillie.

We were interested in lessons that could have been learned.

Related: Why Co-CEOs Are a Bad Idea for Early-Stage Startups, Almost Always  via Derek, who is a co-CEO at Truvani.
Check out unique CEO examples and pick up career advice in my summaries of the books about successful entrepreneurs, CEOs and investors.

We thought that living and working in Waterloo, Canada was an ultimate accelerator to their downfall. They lived in a bubble of Canadian worship, removed from the cutthroat nature of Silicon Valley.

The patent troll lawsuit took a significant toll on the co-CEOs. They ultimately had to pay a $650,000,000 fee (which gave the lawyers a $250m contingency fee!).

Then the back-dating options scandal, combined with the iPhone launch, caused massive distraction and disruption.

Accusations of poor board management were met with the reply: “If we’re doing so bad at governance, why are we making so much money?”

From Steve: LET ME TELL YOU WHY THIS WON’T WORK (CRINGE)

“Unlike rival handset makers, Lazaridis didn’t come to Barcelona armed with 4G device prototypes, but with a physics lecture. He was never shy about teaching carrier executives how network technology worked— Lazaridis often knew better than they did— or explaining how “new” and “more expensive” rarely translated into better performance. RIM had failed to deliver an Apple killer when its top customer needed it or a 4G phone when Verizon wanted it. The consequences would come to haunt RIM at its darkest hour.”

Another highlighted passage from Steve: “Mike refused to acknowledge that we had any material technical issues, to the point that he would miss meetings so that he didn’t hear the negative feedback and hoping that we would not discuss it in his absence. That was wishful thinking, and I personally didn’t think we had any way around it. If anything, everyone was counting on Mike to see the flaws first and fix them as soon as possible.”

Trust in your gut… until you can’t

There wasn’t a lot of discussion about what data RIM looked at — and what analytical frameworks they used — to make business and strategy decisions. RIM seemed to always “go with its gut.”

Luck has played a big role in all of our lives and businesses. But so has good decision-making. Ramit and Ben mentioned a quote by Auren Hoffman which was something like:

Wayne wrote so many great discussion questions, I’m including a few here verbatim from his facilitator outline:

This interview was mentioned in the book. We didn’t think it was terribly scandalous, but it was an interesting look into the character of Mike Lazaridis.

We talked a lot about customer feedback and how to think about it. Ramit shared his own company’s big wins with user surveys and things they learned. Ben shared his survey experience at LinkedIn. Derek talked about protein powder reviews for his new company.

Timing is everything. The BlackBerry revolutionized how we think about email. Users were no longer tied to the desk and workstations. It paved the way for a worldwide consumer addiction to data services. RIM was Canada’s Apple-esque golden child. But the company was almost totally eclipsed by the success of the iPhone, Android, and new hardware manufacturers.

I recommend this book to anyone interested in enterprise sales and technology entrepreneurship.