North Point Church in Alpharetta, Georgia produces one of the best contemporary Christian alt-services. It is on par or better than Hillsong in NYC.

Today’s Christmas Eve show opened with a cover of the song “24K Magic” by Bruno Mars. It had rappers, backup singers, onscreen displays as simulated dancers, and a light show.

I wrote down a bunch of observations and took a few photos which I’ll share in this recap.

To note: Pre-registration on their website was encouraged to give them an idea for crowd control, and we all got a cute handout upon entry. 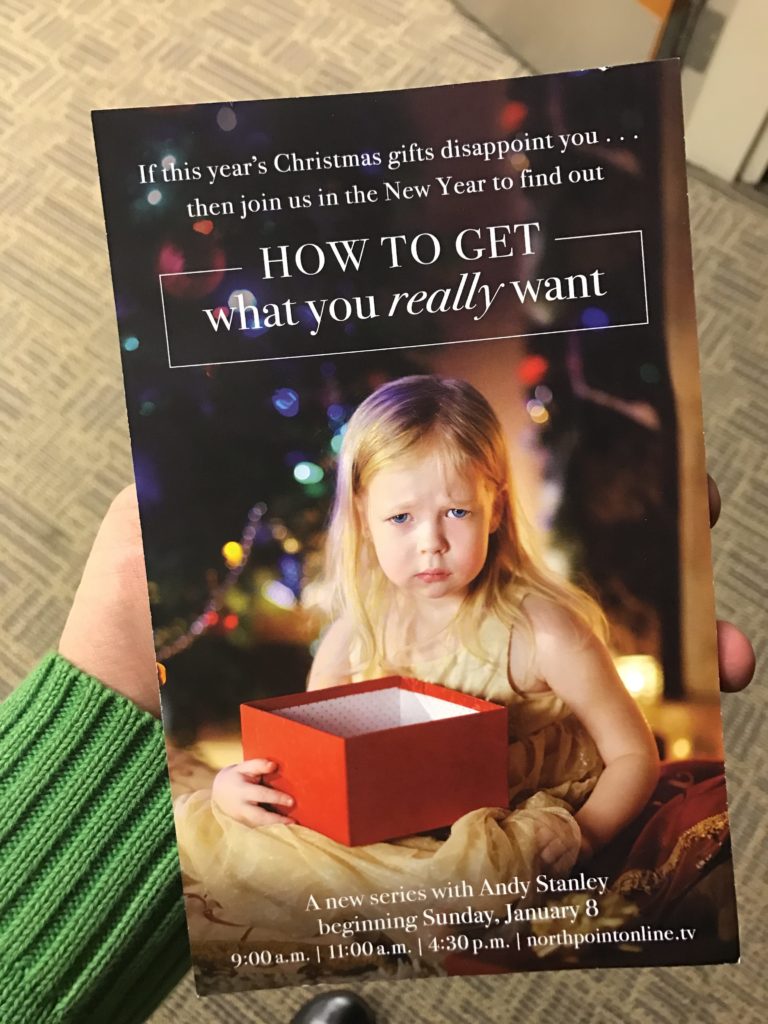 Brochure handout we were all given upon entry 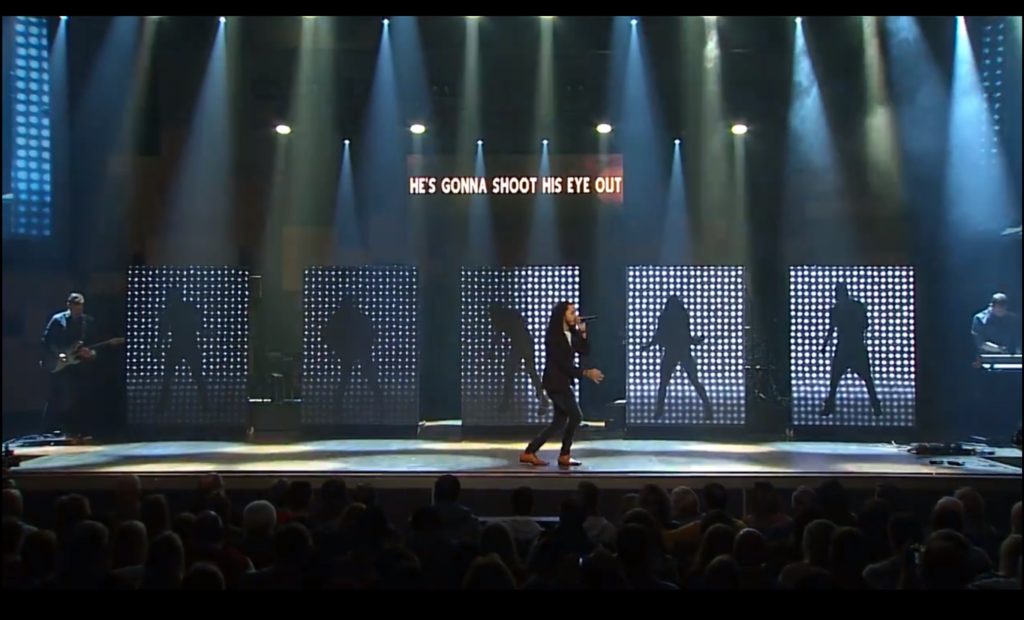 My Random Notes and Musings

We had a video connection to the other auditorium at the beginning, and that host gave a shoutout to Amazon Prime. (Woohoo! Fair disclosure: I’m a shareholder.) It was such a positive shoutout that I felt it MUST have been a paid placement or sponsorship. She said, “Yeah, I got all my holiday shopping done a while ago. It was so easy with Amazon Prime.” I seriously can’t imagine it was a paid placement, but if it was, KUDOS TO EVERYONE.

Update: North Point Church reached out to me on Facebook to say this was not a paid placement, just a fun comment or ad-lib.

Somewhat awkward giveaway and joke about makeup and “Eye Love You”

We took a break to shake hands with strangers and wish them a Merry Christmas. This was fun, but I felt like we could have had more time and made it into a competition. (Shoutout to @dens!)

Lyrics on screen so everyone can easily sing: GENIUS.

I’m acknowledging parts of this service that are not unique, like shaking hands with strangers and the onscreen lyrics. They stuck out to me and I want to talk about them.

I enjoy going to some contemporary Christian services to see how they attract new audiences and re-engage old ones.

Having lyrics projected overhead keeps people out of books, not head-down but heads-up and engaged. Great audience practice.

The massive camera crane. I’m going to talk about it in the Audio/Visual section. Didn’t bother me, but my sister hated it.

Very subjective, but we didn’t see a lot of people in our row giving money for the offering. Of the 16 people in our row, my dad and I were the only ones who put money in. (I typically always give $20 if I’m going to a church. It’s about the same price I’d pay for a movie ticket, and I appreciate all the resources that go into the experience.)

Jokes! And laughing! The best contemporary Christian services I’ve seen incorporate a lot of self-deprecating humor, lots of LOLs from the audience, etc.

During the reading from Luke: 2, the piano player came out halfway through to lay down some tones. This is a very powerful technique. I love it when they do this. The message sounds a lot more powerful and focused with soothing yet strong tones underneath. (Is there a name within the church business for what this is called? Email me if you know!)

Update: North Point Church messaged me on Facebook to say, “The piano playing under the message is called a “pad.”” Thanks!

The pastor used this phrase: “God is for you, he is with you” …

And then when talking about Mary, he said “Mary knew- God is for her, he is with her.” I recently heard that exact same phrasing, with the same emphasis and pacing, at Hillsong in New York City.

I like going to church because it reminds me that there is something much bigger than myself and my business. I like hearing about these forces of good, these tailwinds of hope and purpose.

Genius part of experience design: During the candle part, it’s too big of a church for EVERYONE to get a candle. So they invited people who had a monumental breakthrough with God or Jesus to come up. And the pastor preached loud, he said, “Every story matters!” This is smart because it personalized the relationship that parishoners were having. It connected this huge, over-produced experience with a divine, solo relationship.

We ended with the very upbeat “Go, Tell It On The Mountain.” Simple, not flashy, fun, punchy, happy.

There are five screens on stage. Here’s a screen cap from the livestream:

Each screen featured video of a dancer and had a technician behind to move it around.

Here’s a screen cap from the livestream which I promise wasn’t as ominous looking, but I had to share because I think it looks cool: 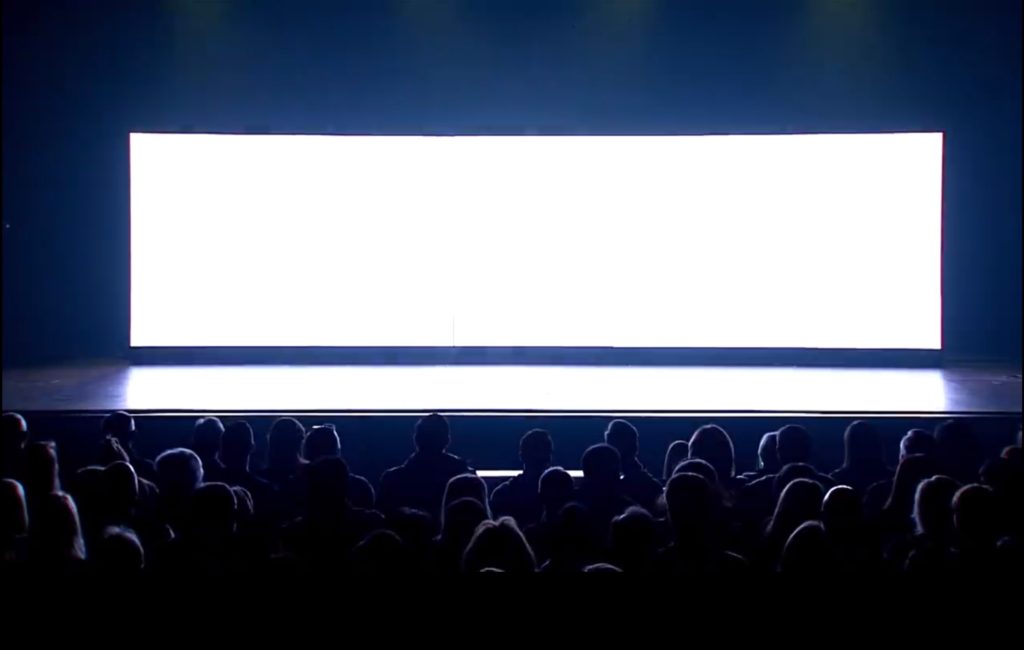 I have to talk about the camera crane, because my sister hated it.

(Granted, we were seated in a maybe-awkward area.)

Here you can see the crane located and towering over stage left:

Tons of AV equipment at North Point Church, including this camera crane

“The side camera was totally wasted. I watched the screens and 99% of the video they used was from the straight ahead cameras. Side camera was super annoying and distracting during the service. Next time I’m going to bring a sweater and throw it on top of that stupid thing so they can’t use it!”
My sister Emily 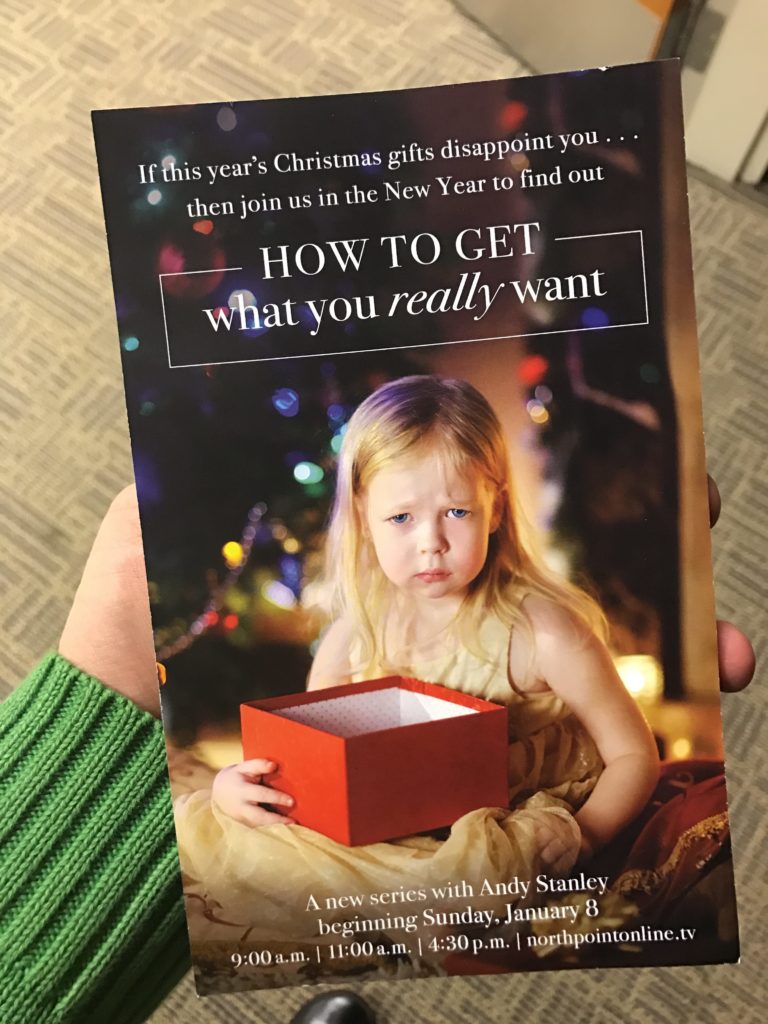 Brochure handout we were all given upon entry, I like the photo 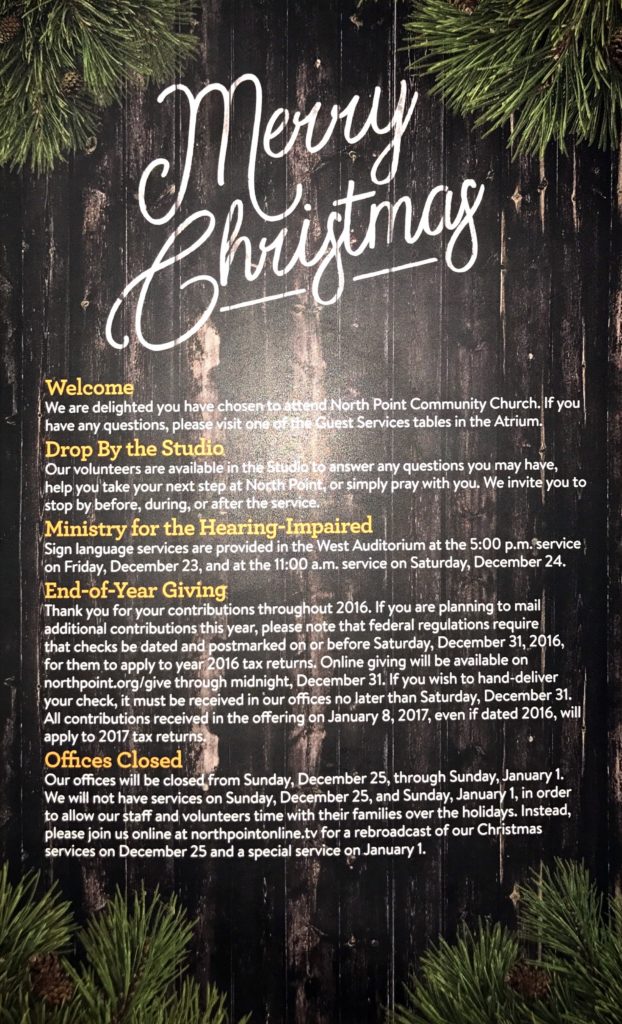 This was a good service.

I’m a logistics guy, so the majority of my commentary has been around specifics and details. I hope that other churches might find this information helpful in the design of their own Sunday practices. Or maybe in the future, someone from North Point will enjoy reading this.

In research for this post, I happened to read some of the negative reviews of North Point Church and Andy Stanley. Detractors say a lot of similar things that I hear said about Museum Hack: it’s too loud, it is off-brand, the facts are incorrect, and it has strayed too far from home.

What I saw today were thousands of well-dressed, cheerful people celebrating a religion with a positive, uplifting message. North Point Church continues to be a force to be reckoned with.

I’m including this screenshot from their website requesting a reservation in case any other church wants to see the copy. The messaging here is very interesting.