I heard about a great success story during my research about business development companies (BDCs).

The story involves billions of pounds of ice, millions of dollars of loans, and a company growing like crazy thanks to a middle-market lender. 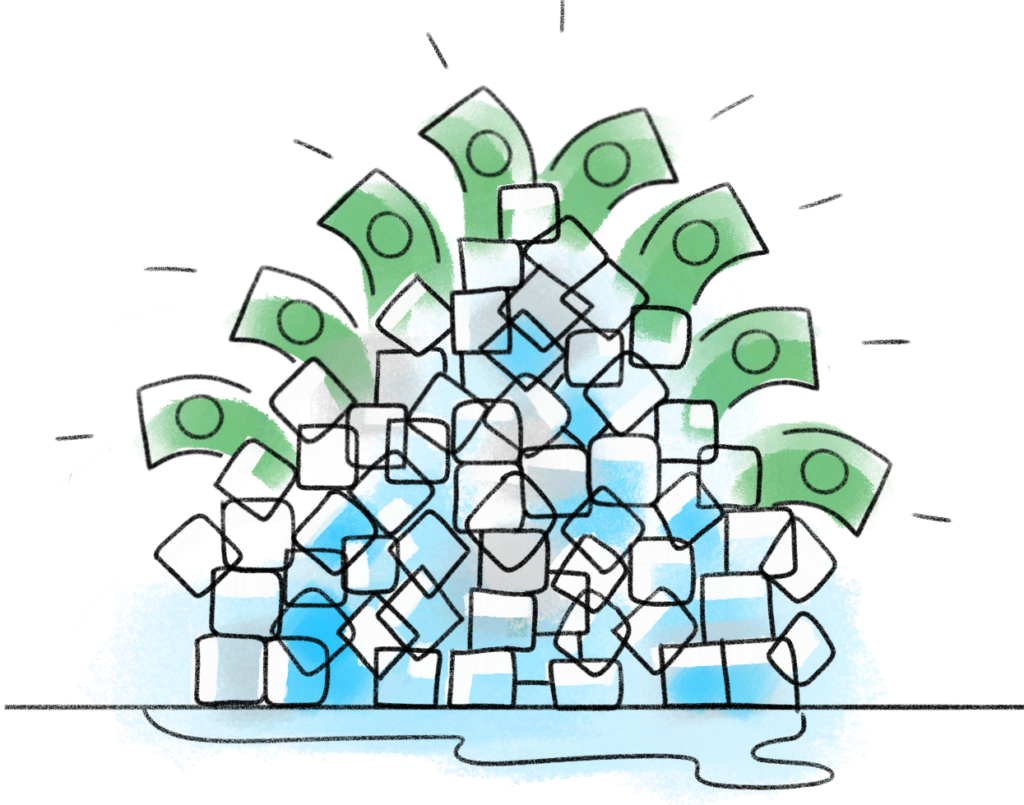 In an unlikely twist, the lender then gained control – even though the company was healthy – in a friendly buyout.

They invested more money and finally sold the company for a huge profit. It was the single largest and most successful deal in the lender’s history.

This is the story of Easy Ice and Saratoga Investment Corp.

There are two main subjects in this story: Easy Ice, a subscription-based commercial ice machine business, and Saratoga Investment Corp, a lender of money to growing companies.

They planned to offer a subscription-based business model that “takes the hassle out of owning a commercial ice machine.”

Hangen and Mahlmeister believed that a subscription-based model for ice machines could be a big business.

This same monthly subscription model was already being used for commercial dishwasher machines in the food service industry, racking up tens of millions of dollars for companies like EcoLab and Auto-Chlor.

Hotels and other businesses can either buy and manage a huge ice machine, typically for $3,200, like this one: Or business owners can just pay a monthly fee to Easy Ice to rent it. 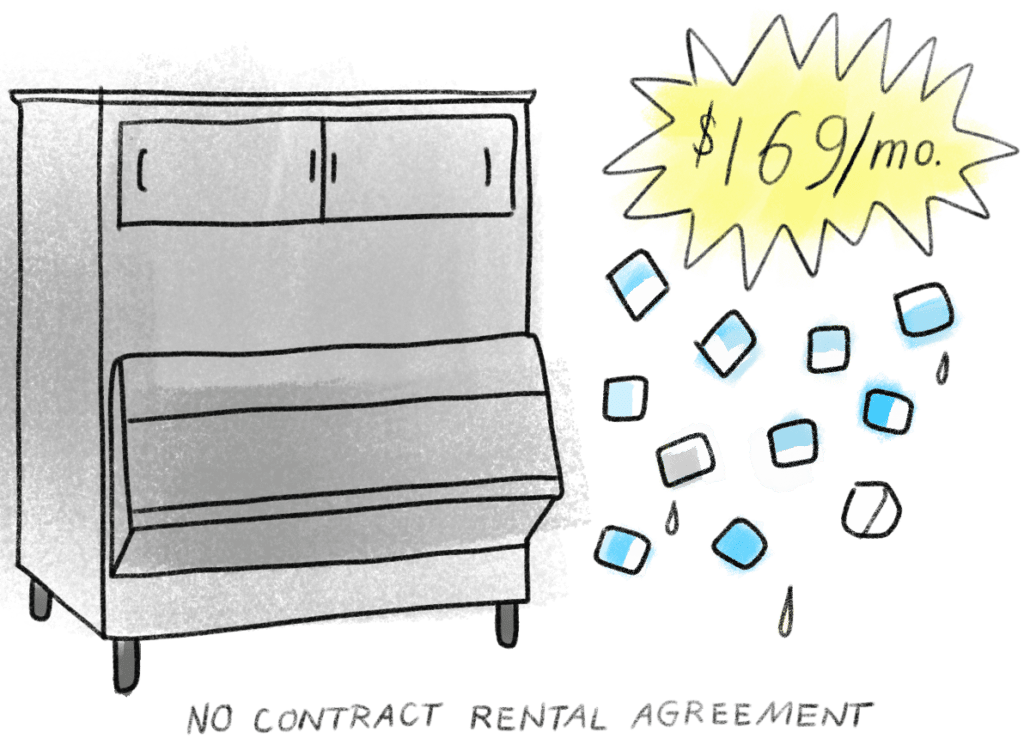 The monthly subscription fee includes leasing the ice machine plus all service and maintenance costs.

The rental model distinguishes Easy Ice from competitors who only sell the machines outright, often for thousands of dollars. Renting from Easy Ice reduces overall costs for the business owner.

That’s a lot of ice machines.

Ice machine rental was an entirely new category of business.

In order to grow, Easy Ice needed a lot of money to buy thousands of ice machines which they would then rent out.

Most traditional banks wouldn’t lend money to Easy Ice in 2013. It was still too new of a business. Perhaps it was also too risky to secure a business loan with high-maintenance ice machines that would be scattered across the country. 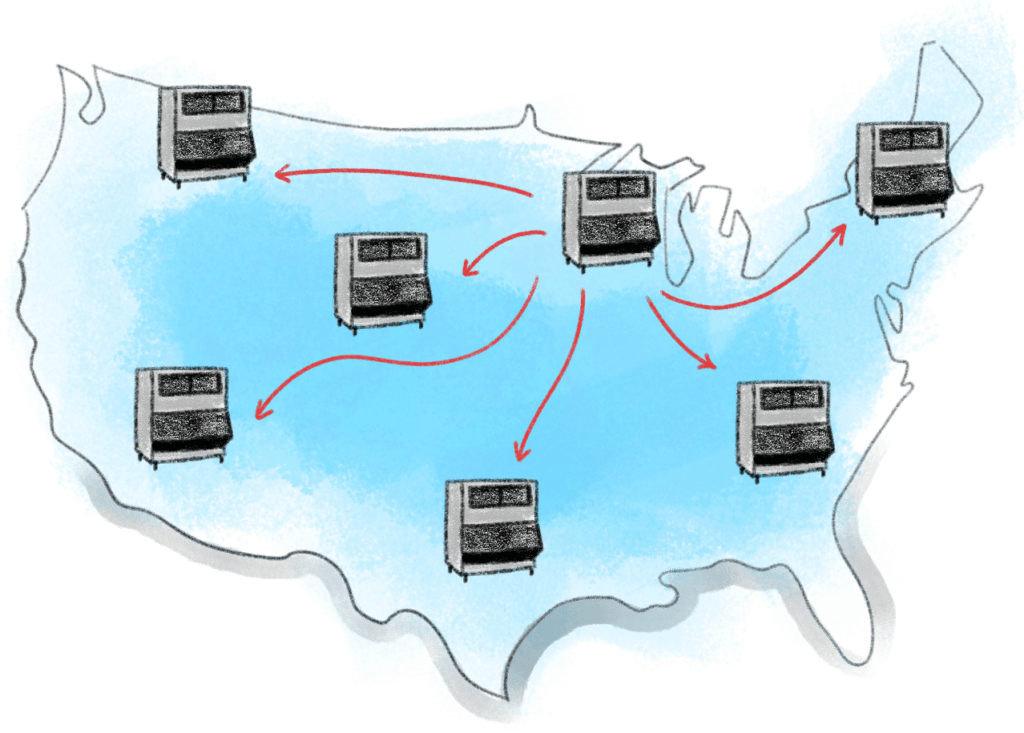 Easy Ice wouldn’t qualify for a large bank loan, and they were too small to issue a bond.

So how could they get money to grow?

There are fifty publicly-traded BDCs. Together they represent around $100 billion dollars of funding and market capitalization. 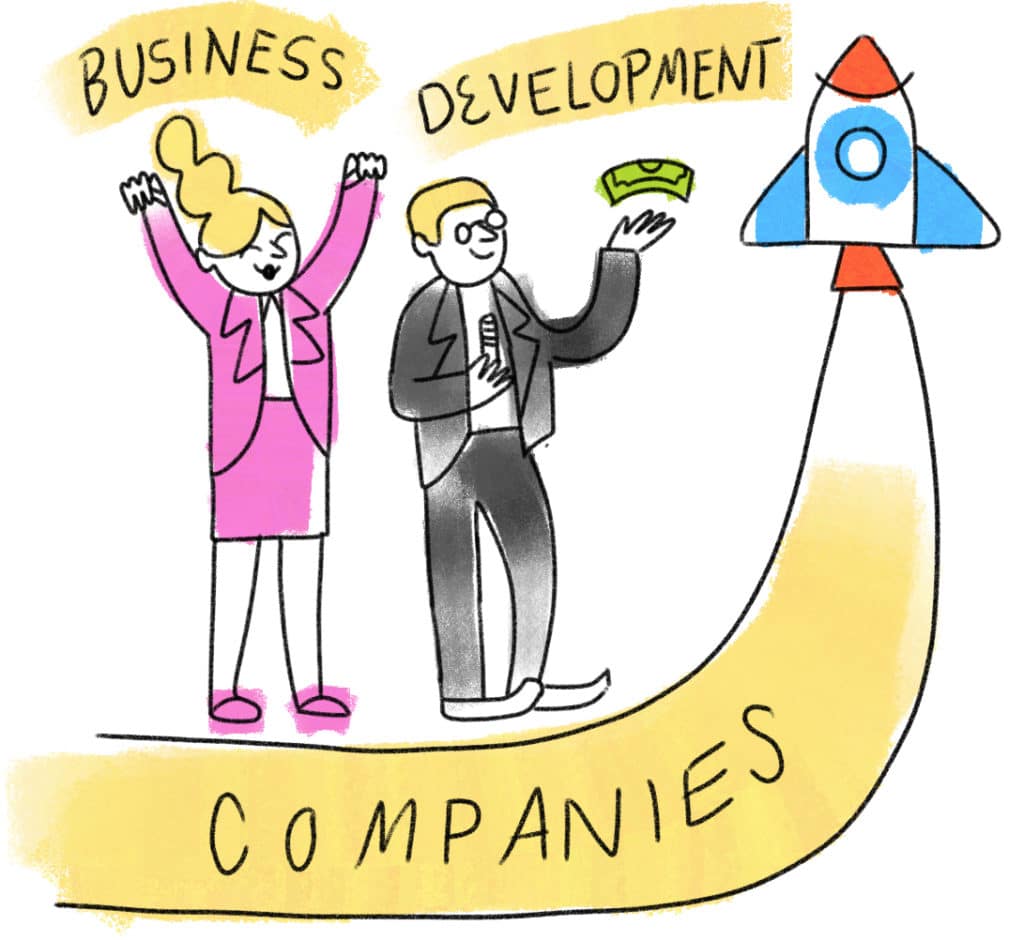 I’ve written more about BDCs on my research article here, including the most popular ones like Ares and research resources like the BDC Reporter.

Taking a BDC loan was the best choice for Easy Ice. They could borrow lots of money without giving up ownership, or equity, like a venture capital or private equity firm might require. Taking a BDC loan would also make it easier for Easy Ice to have flexible repayment terms, like Payment In Kind (PIK).

Fun fact: A PIK loan allows a company to make their interest payments later in time. It means you’re paying your old debt with new debt, and that can be seen as risky.

The BDC that Easy Ice selected was Saratoga Investment Corp. Here’s what Mark Hangen, the Easy Ice CEO, said at the time:

“When evaluating options, a CEO needs to think beyond just the bottom-line cost of capital. For us, the right lending partner was a BDC because Saratoga… recognized that my business was best served by reinvesting my free cash flow to grow.”

This included money from two sources: 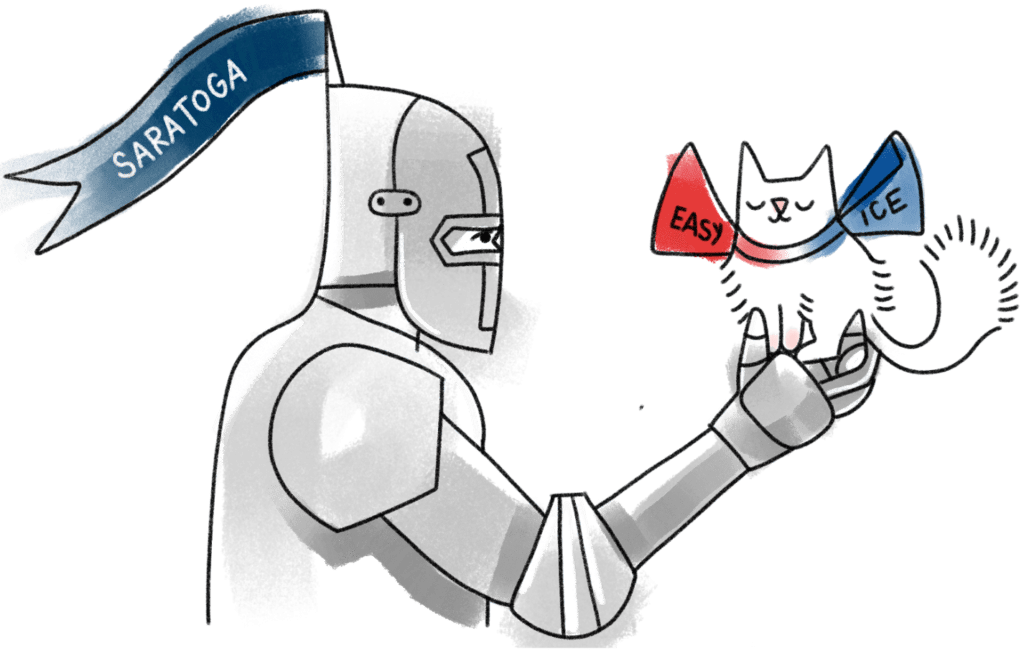 Spoiler alert: They’ll be the ultimate hero in this story. The loan wasn’t very risky, either: first-lien means that Saratoga gets first dibs on any of the business assets in a bankruptcy.

The $12 million investment from Saratoga helped Easy Ice grow its customer base by 181%. (source) They built a presence in 45 U.S. states and tripled their revenue and earnings.

Easy Ice’s master growth plan was working, but it was expensive.

For each new $179 monthly client, they needed at least $3,000 in immediate capital to buy the ice machine, plus thousands of dollars in labor costs for sales and support.

According to annual reports from Saratoga, Easy Ice had an operational profit in both 2015 and 2016. But if you calculated the cost of interest on their loans, Easy Ice was showing a net loss.

This was not alarming to Saratoga. Since its inception, Easy Ice never had much free cash flow. They were always redeploying any profits back into the company. 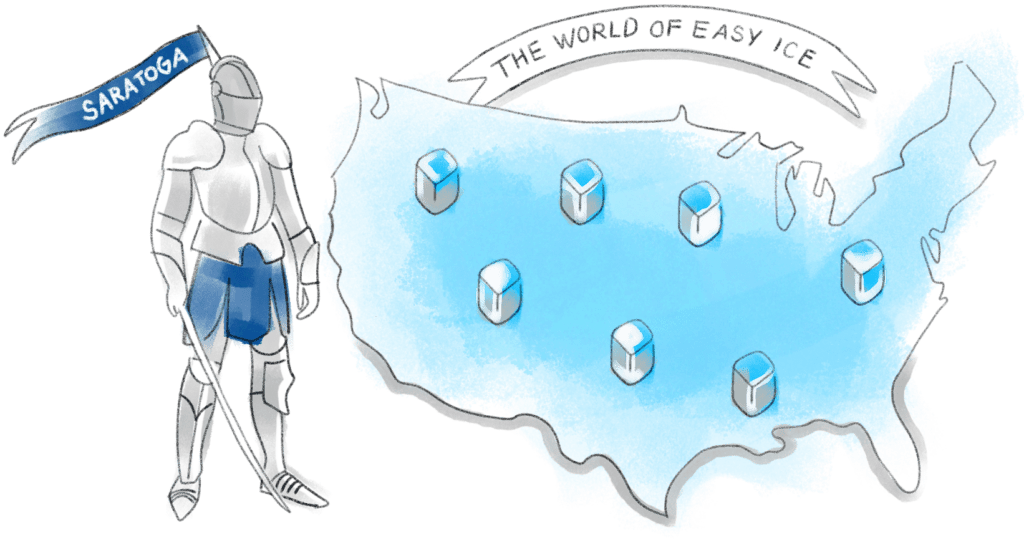 Saratoga understood that management could always dial back their growth strategy and turn Easy Ice into a very profitable company.

The original lending agreement from Saratoga was structured to use Payment-in-Kind (PIK). Easy Ice wouldn’t have to make traditional interest payments on their loan until it was due in several years.

PIK loans are usually a worst-case scenario. A company is paying their debt with more debt. This can signal cash flow problems and a lack of profitability.

But Saratoga wasn’t worried. They had planned for this and they continued to see healthy market share increases as Easy Ice expanded. Profits would come later.

An Unexpected Change in Control

In 2017, a surprising opportunity popped up.

Reddy Ice, a manufacturer of packaged ice and an early private investor in Easy Ice, was preparing to be sold to a private equity firm. They wanted to sell their 45% ownership stake in Easy Ice in order to streamline their balance sheet.

Saratoga leapt at the opportunity. They knew that despite the net losses, there would someday be gold at the end of this chilly rainbow.

This purchase of such a large percentage of the company was extremely unusual.

Most lenders don’t take majority control of companies. If they do, it’s as a last resort and typically when a company is failing.

But Easy Ice was definitely not failing.

Saratoga knew they could make money as Easy Ice would continue to grow with their financing. They saw the potential and were willing to take the risk in buying the equity from their BDC funds.

Saratoga Investment Corp purchased 45% of Easy Ice in February 2017 from Reddy Ice. This made them the largest shareholder and gave them control of the company.

At the same time, Saratoga dramatically increased their loan to Easy Ice from $13.8 million to $26.7 million. This additional funding would allow Easy Ice to acquire a competitor in Chicago.

Saratoga also invested in an $8 million preferred-equity position, buying out 45% of the company equity from Reddy Ice.

Fun fact: Reddy Ice was sold in 2019 to Stone Canyon, a company backed by Michael Milken.

By 2018, Saratoga was already seeing results at Easy Ice. They quietly marked up the value of their $8 million preferred equity position by $2 million in their annual report.

And then suddenly, without any warning: they sold everything.

Saratoga announced on December 31, 2019 that they had sold Easy Ice. 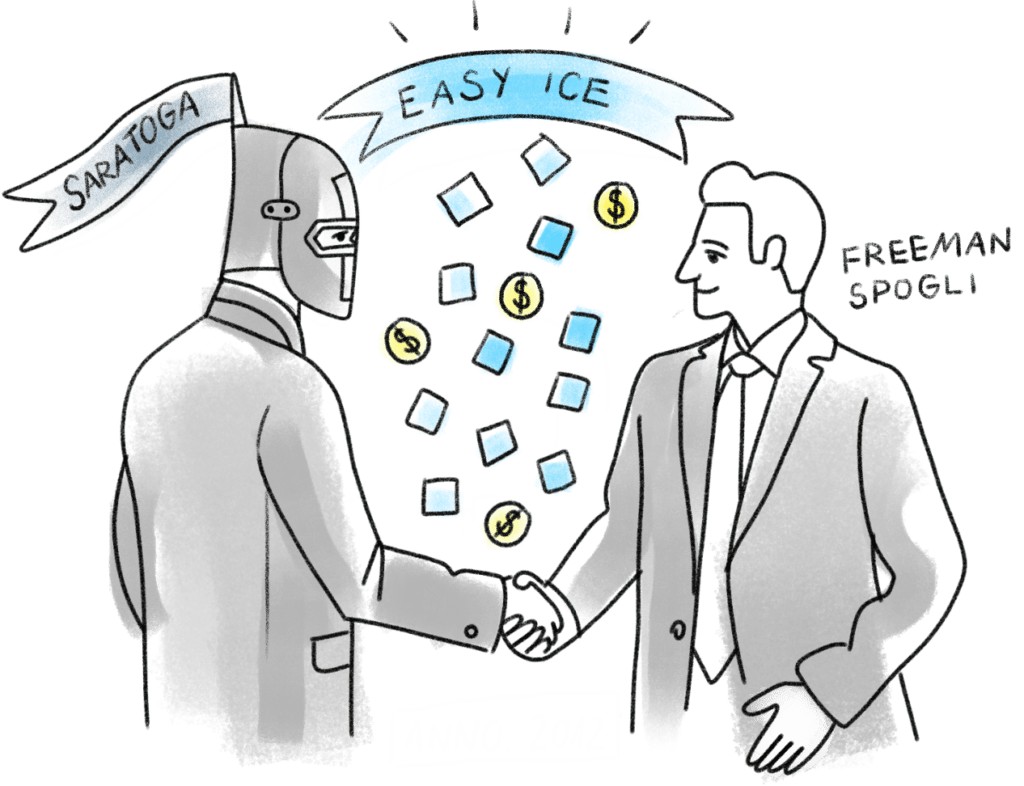 Saratoga saw a cool $31.2 million profit on the sale of their Easy Ice investment.

It was the single largest deal in Saratoga’s history.

Business development companies like Saratoga are supposed to operate more like banks than venture capital firms. They operate with a much lower risk tolerance. BDCs rarely take control of the companies that they lend to, and never when things are going well.

This was a unique situation. The $31.2 million windfall happened because of a few critical factors:

In the end, Saratoga Investment Corp. made their largest ever debt investment, bought a controlling equity stake, and then sold their shares in Easy Ice for a very large profit.

Saratoga is a BDC based in New York City that offers capital and guidance to middle-market businesses. In plain English, that means they:

Easy Ice was founded in 2008 in Marquette, MI, USA. The company prides itself on knowing ice better than anyone. They even maintain a blog to educate subscribers about different aspects of ice. Easy Ice sells monthly subscriptions, which include a commercial ice machine along with all service and support. The subscriptions offer:

Saratoga made a total investment of $40.4 million dollars in Easy Ice, including:

After the new buyer repaid the debt, Saratoga received an additional $35.6 million in fees, interest, and proceeds. They saw a $31.2 million gain from their Easy Ice preferred equity investment with a cost of $10.7 million.

Credits: Thanks to Bethany Mangle, Danielle Dahl, and more for research help. Thanks to Fru Pinter for graphics. Thanks to Claire Boston and Joe for editing suggestions.

Do you have any Easy Ice gossip or additional facts I can add to this story? Notice a correction that needs to be made? Send me an email or message me on Twitter.