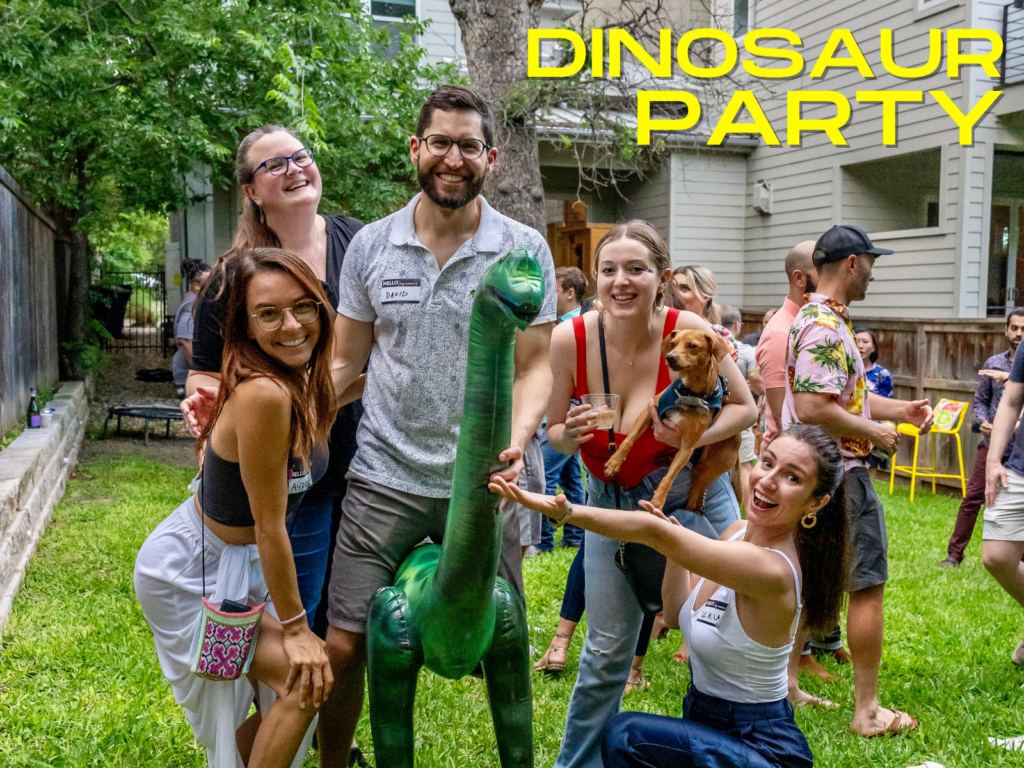 Last night I hosted a big Dinosaur Party for my friends in Austin, Texas.

I’ll show you how to host a dinosaur party for adults, including:

Why You Should Host a Dinosaur Party

Perhaps you are wondering: Aren’t dinosaurs a kids thing?

Yes. But they can also be an adult thing.

Dinosaurs are a gateway drug to science.

They are an access point to think and talk about life, science, and biology.

Disclaimer: My Friend is a Dinosaur Expert

I invited my friend Dustin Growick to visit me in Austin. He is a world-famous dinosaur expert.

Now, this is an unfair advantage: You probably don’t have a friend who goes by the name “Dinosaur Whisperer” online. (Instagram, Twitter)

But don’t worry. You can still host a fun party for your friends to talk about dinosaurs.

Fun fact: Dustin and I started working together 8 years ago. He designed and led our Museum Hack science tours at the American Museum of Natural History.

First, we invited a few of our friends in Austin.

It turns out that many adults love dinosaurs. We received many RSVPs.

But then a LOT of people showed up. Everyone wanted to bring friends.

Here are a few things that I bought to add to the dinosaur party theme:

Everyone attending the party received a name tag from me.

Name tags help me a lot!

I have a hard time remembering names. Name tags also help people who are introverts.

We also did icebreakers. Everyone went around the circle (a big circle!) and very, very quickly said their name and what they do for work.

I’m writing about why name tags and icebreakers should be used more often at social gatherings in a how-to book about party hosting. I’m not sure when I will release it, but you can read some of my thoughts on icebreakers and on name tags here.

The big thing to know is this:

You get to learn little bits about people to maybe network with later.

But the real friends are the dinosaur facts we learned along the way.

Dustin made a few slides in Keynote. Then we played those slides on his laptop and projected them onto the TV with an Apple TV.

This was a nice way to have relevant and fun party decorations about dinosaurs. It was also nice to give some more introverted people something to watch.

You can make your own slides with clip art and random dinosaur facts online.

Next, buy a bag of tiny dinosaur toys. Here’s one on Amazon that Dustin says is good for under $10.

Everyone attending the party gets a tiny dinosaur toy.

There were about 20 different types of animals inside the package. (Some of them are not technically dinosaurs. #science)

Pro tip: You must have enough dinosaurs for each person at your party.

Before the party, sort all of your dinosaurs. Place them into piles of each type.

You don’t want too many different types of dinosaurs. Later you will split your party into groups. 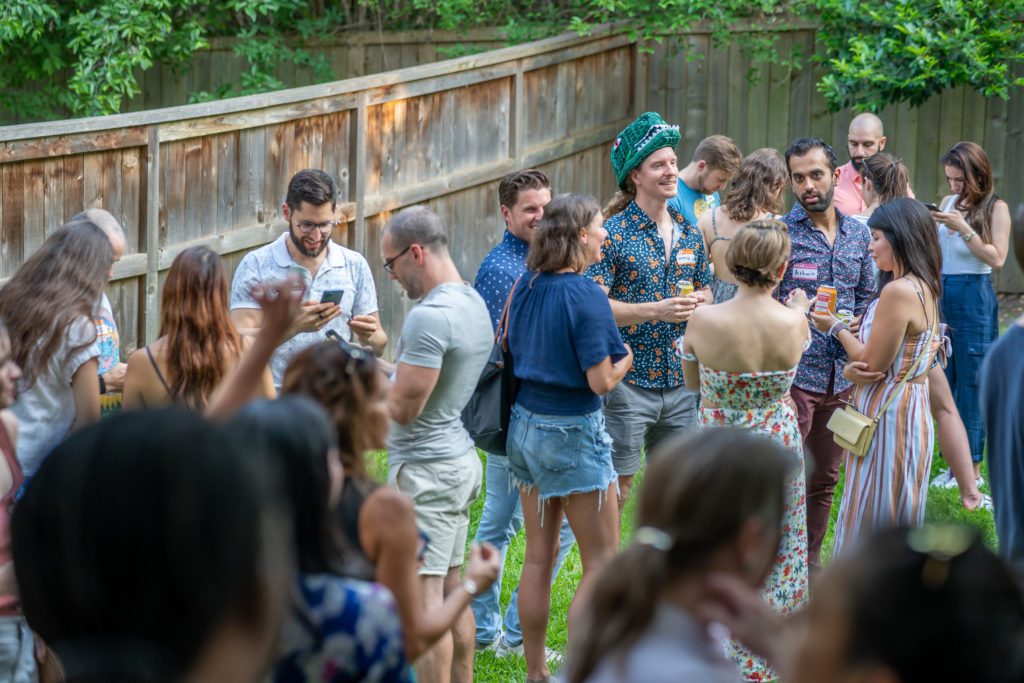 To split people into groups, tell everyone:

Find and form groups based on the exact type of dinosaur in your hand! You have 30 seconds. Go!

Tell each person what type of dinosaur they have and how to spell it. You need to find this out beforehand.

Then, challenge the groups to look up trivia facts on their phones based on their type of dinosaur.

Pick the best piece of trivia to share to the entire party.

The best dinosaur fact, as determined by the host, wins a prize.

We called everyone together outside and split them into groups again, this time based on the color of their name tags.

These are the name tags that I currently like best, as of May 2021.

The first group to shout out the answer won.

These are the blow-up dinosaurs I bought:

This was so much fun. Major thanks to my friend Dustin and to everyone who attended.

Hosting a dinosaur party for adults is an excellent way to talk about science and meet new people.

The point of the party wasn’t necessarily to learn about dinosaurs. That’s just the hook.

The purpose of party is to make new friends and meet interesting people.

Everyone can use a new friend, especially after this past year.

Dinosaurs are a great way to get there.

THE END!! Thank you for reading.