I was at the Preview night for Frieze yesterday and was surprised to see a huge Soylent booth filled with cases and refrigerators of the liquid meals. Here’s a quick video, plus pictures:

“The dystopic quality of the booth is palpable—it’s shiny, strange, and new, and also really unsettling.” 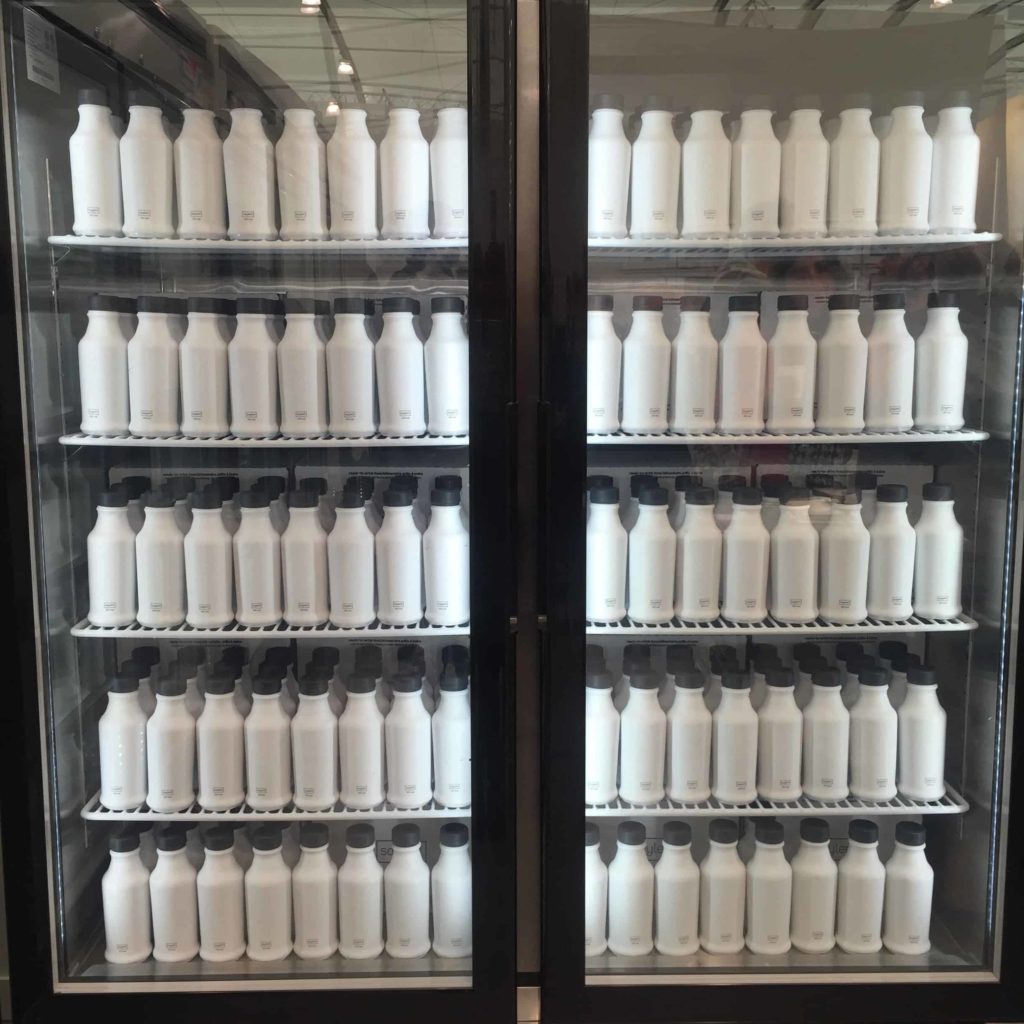 Many bottles of Soylent in the industrial refrigerators. Photo by Samantha Shankman 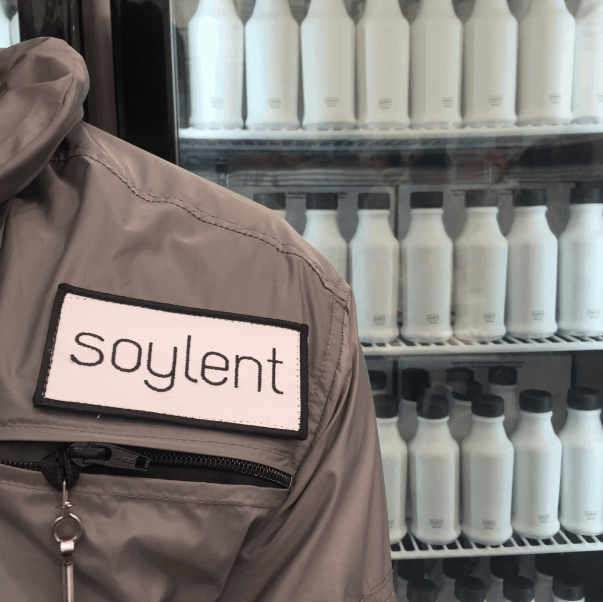 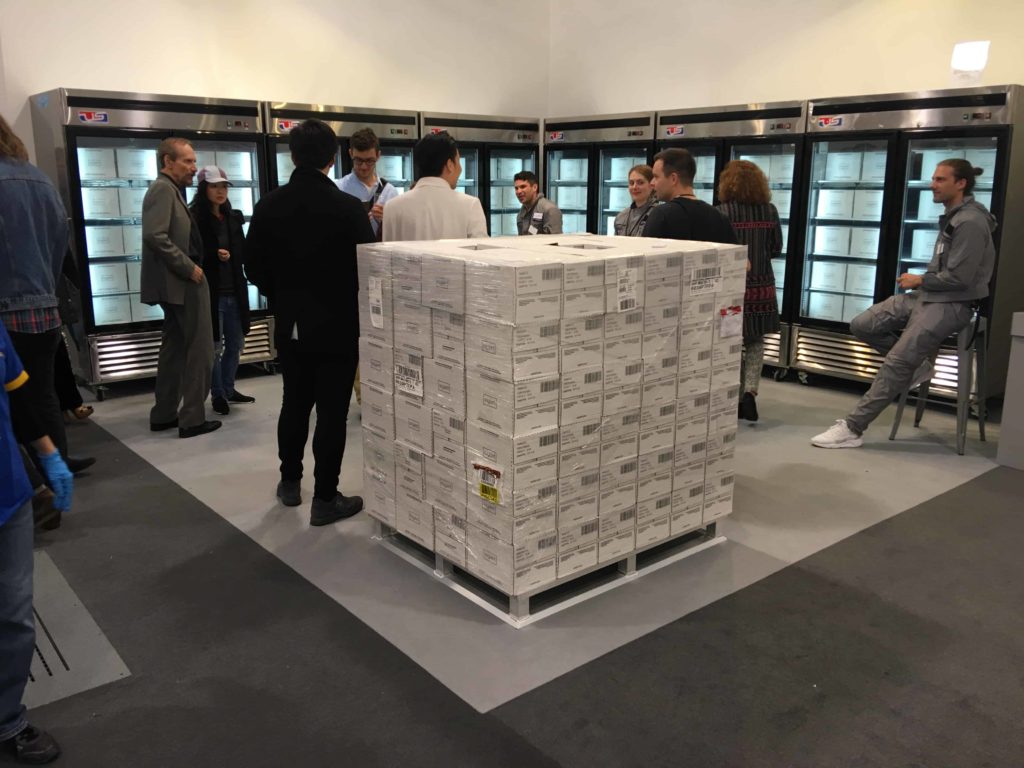 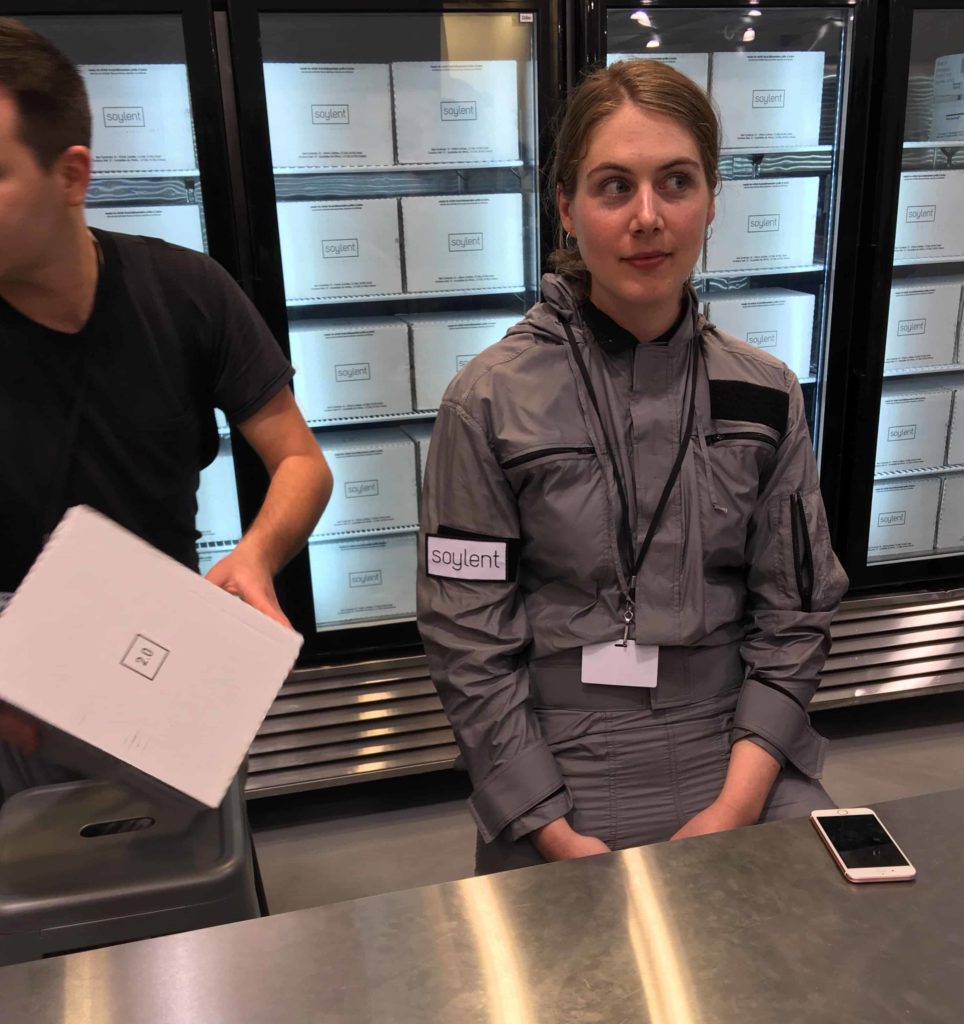 ArtNews Review: “Arranged like a juice bar, the Soylent display would be more at home at a trade show than an art fair, and Société staff, dressed in gray lab suits, were happily giving away bottles. Each has 20% of a day’s worth of nutrients in it, supposedly. The Soylent drinks are currently available to the general public, but an algae-derived paste, available in sacs at the booth, is an experimental prototype.”
SOURCE: SEAN RASPET BRINGS SOYLENT PRODUCTS AND PROTOTYPES TO FRIEZE NEW YORK 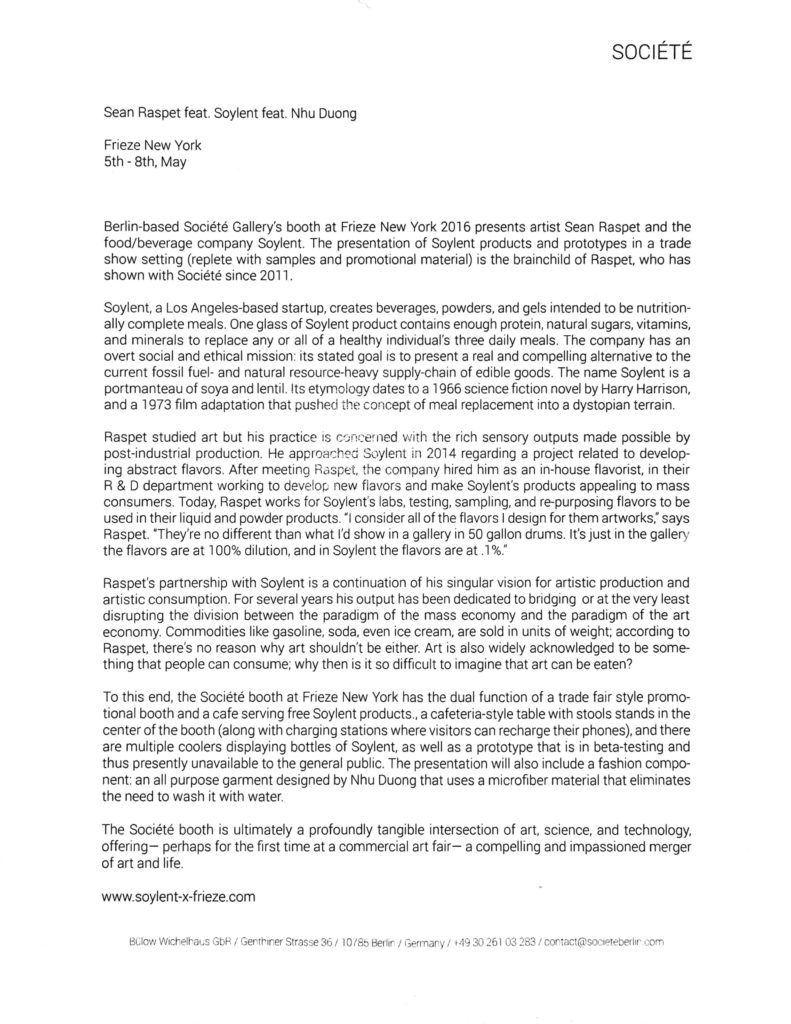 This was a handout in the Soylent art booth. Text below.

Berlin-based Societe Gallery’s booth at Frieze New York 2016 presents Sean Raspet and the food/beverage company Soylent. The presentation of Soylent products and prototypes in a trade show setting (replete with samples and promotional material) is the brainchild of Raspet, who has shown with Societe since 2011.

Soylent, a Los Angeles-based startup, creates beverages, powders, and gel intend to be nutritionally complete meals. One glass of Soylent product contains enough protein, natural sugars,vitamins, and minerals to replace any or all of a healthy individual’s three daily meals. The company has an overt social and ethical mission:its stated goal is to present a real and compelling alternative to the current fossil fuel-and natural resource-heavy supply-chain of edible goods. The name Soylent is a portmanteau of soya and lentil. Its etymology dates to a 1966 science fiction novel by Harry Harrison, and a 1973 film adaptation that pushed the concept of meal replacement into a dystopian terrain.

Raspet studied art but his practice is concerned with the rich sensory outputs made possible by post-industrial production. He approached Soylent in 2014 regarding a project related to developing abstract flavors. After meeting Raspet, the company hired him as an in-house flavorist, in their R & D department working to develop new flavors and make Soylent’s products appealing to mass consumers. Today, Raspet works for Soylent’s labs, testing, sampling, and re-purposing flavors to be used in their liquid and powder products. “I consider all of the flavors I design for them artworks,” says Raspet. “They’re no different than what I’d show in a gallery in 50 gallon drums. It’s just in the gallery the flavors are at 100% dilution, and in Soylent the flavors are at .1%.”

Raspet’s partnership with Soylent is a continuation of his singular vision for artistic production and artistic consumption. For several years his output has been dedicated to bridging or at the very least disrupting the division between the paradigm of the mass economy and the paradigm of the art economy. Commodities like gasoline, soda, even ice cream, are sold in units of weight; according to Raspet, there is no reason why art shouldn’t be either. Art is also widely acknowledged to be something that people can consume; why then is it so difficult to imagine that art can be eaten?

To this end, the Societe booth at Frieze New York has the dual function of a trade fair style promotional booth and a cafe serving free Soylent products., a cafeteria-style table with stools stands in the center of the booth (along with charging stations where visitors can recharge their phones), and there are multiple coolers displaying bottles of Soylent, as well as a prototype that is in beta-testing and thus presently unavailable to the general public. The presentation will also include a fashion component; an all purpose garment designed by Nhu Duong that uses a microfiber material that eliminates the need to wash it with water.

The Societe booth is ultimately a profoundly tangible intersection of at, science and technology, offering– perhaps for the first time at a commercial art fair– a compelling and impassioned merger of art and life.

Because Soylent was giving out food to the public, they had to get this Health and Safety license. My friend Jonathan Wegener spotted it on top of one of the refrigerators. 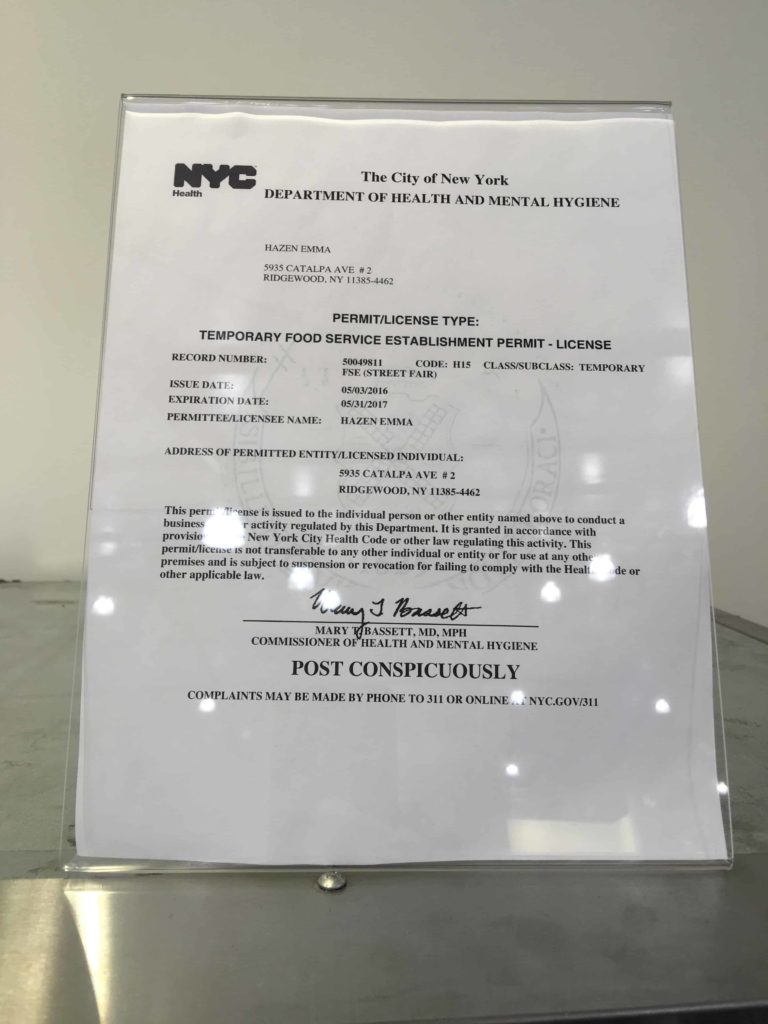 Permit for Soylent at Frieze from New York City Cases of Soylent cooling at 7pm on Wednesday night