How AIM Helped Inspire a Generation of Tech Entrepreneurs

In 2003, I broke into a basement storage room at Wake Forest University, desperate to find servers that could store AOL Instant Messenger data.

As a college student, I was among the millions who had become obsessed with the service. 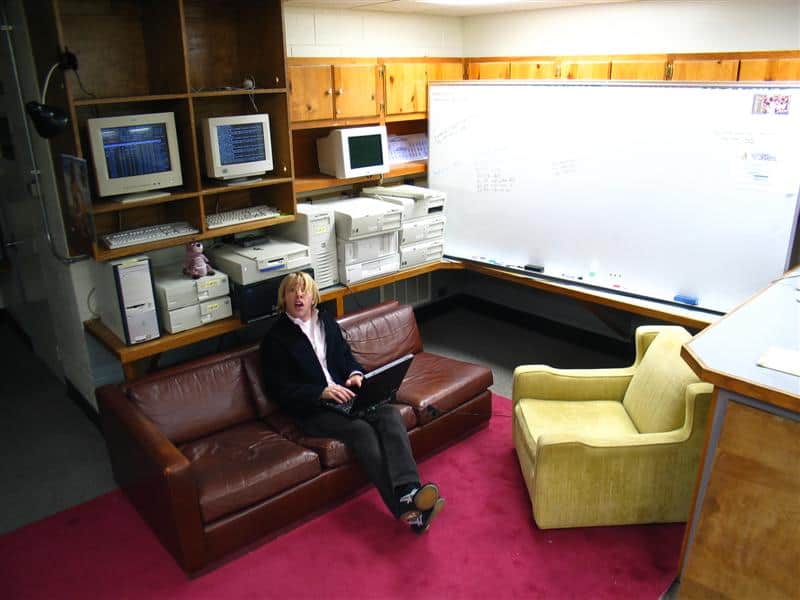 Me in 2003. Some of the computers behind me were likely “borrowed” from the storage room.

I was so consumed by AOL Instant Messenger in 2003 that I started my first-ever software company, BuddyGopher, which was devoted to storing and saving those away messages. In my friend circle, creating witty missives on AIM had become an elevated art. I was determined to catalog these messages and help make them easier to read.

Recently, this adventure came flooding back into my mind when I learned that on December 15, AOL was shutting down AIM, its iconic instant messenger program after 20 years. Now the chirpy sounds of “hello” and “goodbye” and the little yellow “Running Man” that for so many people was an introduction to digital communication will no longer be supported. With no messenger replacement in sight, as AOL said in a statement on its website, buddy lists and data associated with AIM would also evaporate.

RIP to AOL Instant Messenger, you served us well during the early years of my online times. Pic via Geeks of Doom.

The tributes and pleas for early-internet nostalgia poured in, one after another, with even Golf Digest lamenting AIM’s demise — farewell to the buddy icons, to the acronym-heavy lingo, to the era when, before cell phones, so much of our lives was ruled by a single, slow dial-up modem connection.

One of AIM’s lesser-known but crucial legacies is as an inspiration for me and countless other entrepreneurs. AIM was like a model chemistry set that helped build the internet we all use today, an unsung laboratory for curiosity.

Perhaps it’s not surprising then that one of the earliest mourners of AIM was Facebook founder Mark Zuckerberg. “AOL Instant Messenger was a defining part of my childhood,” Zuckerberg wrote in a public Facebook post. “As part of the first generation to grow up with the internet, it helped me understand internet communication intuitively and emotionally in a way that people just a few years older may have only considered intellectually.”

This feeling of connection was true among my friends, as well, as AIM was one of the earliest incarnations of our desire to tell our stories online.

“It was kind of like being on an early Twitter or MySpace or Facebook,” Roger Lee, a friend of mine who created SubProfile with a friend while still in high school in 2002, recently told me. “It’s the thing that ended up spawning what we now know today to be social media.”

In addition to creating one’s own screen name (mine was MrSurfer99), AIM had the ability to create a user profile. But, as Roger noted, “you couldn’t do very much in it.”

SubProfile created a hack to get past the 1,024 character limit on AIM profiles and used AIM’s limited HTML capabilities to create a longer, more extensive profile that lived within the original AIM buddy profile window. It wasn’t long before users began to post about their favorite foods, music, movies, quotes they loved, or other expressions of their personality. SubProfile was a Facebook wall before Facebook had the wall.

At its peak in 2002, SubProfile was generating over 30,000,000 pageviews per month. That is an insane volume of traffic even by today’s standards. (Buzzfeed gets 250M views monthly, so it is not Buzzfeed… but for 15 years ago, it stands tall.) And it was all operated by two high school kids, under-the-radar. The SubProfile founders had dozens of servers before Amazon Web Services, meaning they built the server farm themselves that millions of daily active users relied upon.

Roger’s AIM business was also an unintentional primer in the risks of online security. One time, while still in high school, his SubProfile domain name servers were hacked and he stayed up all night long to negotiate with the hackers. He eventually wrestled the domain name back with a small bribe paid via PayPal. Roger then went to high school classes the next day in a daze, his classmates totally unaware that he had spent the night trying to save millions of AIM SubProfiles from obliteration. “If we were older at the time,” Roger said, “we would have hired a server admin.”

Roger’s interest in maintaining the site waned as he went to college and his involvement with AIM shifted to other burgeoning platforms. SubProfile shuttered around 2007. Today, Roger is CEO of Captain401, a company that automates worker retirement plans.

“It was nuts,” he said, of his SubProfile and early AIM days. “We didn’t quite appreciate it at the time, but now looking back… this is how I fell in love with the internet and starting businesses. It all comes back to this.”

My own AIM-inspired business, BuddyGopher, left the internet in a similar way. After spending some time during and after college trying to build BuddyGopher out, including four months in India, I ultimately shut the site down in 2005 and went on help grow my family’s new avionics business. This decision foreshadowed what would be a sharp decline for AIM, which took it from having roughly 50 percent of the messenger market share to less than one percent in 2011.

But my experience with AIM helped pave the way for the business I later founded, Museum Hack; the basis of which, perhaps ironically, is getting people to interact with each other in real life in new and meaningful ways, with museum art as the unifying force.

I know I’m among the generation of entrepreneurs whose nostalgia for AIM is rooted in something deeper than profiles, icons, and alert noises — though let’s be clear, I will miss those. I feel like we’ve passed the time when the internet still felt shiny and new and represented a vast frontier of infinite possibilities. I’m guilty of crafting my own Tweets and Instagram posts to maximize engagement and monetization. I miss those more pure days of innocent content creation.

Today, social media is a bittersweet offering. We can now connect with friends and family worldwide faster and more efficiently than ever. Robust communities have formed. Social movements have been fueled. But we’re also examining how it’s impacting our brains and wellbeing, as well as our relationship with politics, journalism, and each other.

Maybe it’s fitting then that AIM lost its footing to the very type of chat apps (like Facebook Messenger and WhatsApp) that drew their inspiration from AIM to begin with. If away messages were the precursor to Twitter, and AIM profiles the forefront of the Facebook Wall… the tools we use today owe a great debt to AIM.

A company can delete the AIM data, but it can never erase its far-reaching impact.

Mary Pilon, who once existed on AIM as supergurl405, helped a lot with editing this. Shoutouts to interviews with Ryan Farley, my original BuddyGopher co-founder and CTO, Owen Prater at Buddy4u, and Matthew Sachs who made the Net::OSCAR library. Thanks Ramit Sethi, Mike Smith, Michael Alexis, Neal Gray, and Michael Miraflor for article feedback.

What's On My Cork Board?
Book Club: What Got You Here Won't Get You There
Pérez Art Museum Miami: First Impressions
Hypatia and the Heathens
Random Notes About Singapore
How to Play Tennis in Grand Central