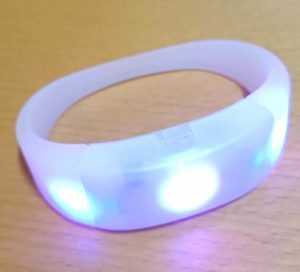 This bracelet is manufactured by a company named PixMob.  PixMob is based in Montreal, Canada and according to this Wired magazine article about them, “PixMob has been refining its new infrared technology for more than a year, and they’d been thinking about doing something like this since they started the company six years ago.”

I was totally captivated by this technology.  It blew my mind and made me feel very much like I was living in the future!  At one point during the concert, everyone’s bracelet became activated all together, 60,000 peoples bracelets began lighting up and pulsating to the music.  This was an incredible site to look out at over the stadium to see the individual nodes that I was now apart of thanks to this technology.

The PixMob technology is not brand new to the world.  It has been used at these places as well:

One thing that I wasn’t able to figure out was which frequency or how the bracelets were controlled.  They were not all controlled the same.  For example, the people on the ground floor would be a different color than the people on the stands.  They appeared to have very precise control as to which bands were lighted with what.  I’m not sure how they did this unless the people that came into the ground floor got different coded hardware than me and my friends in the upper seats.

This was a fantastic example of new consumer technology that was displayed on a massive scale in an entertaining fashion.  I am excited for new technology like this in my life.