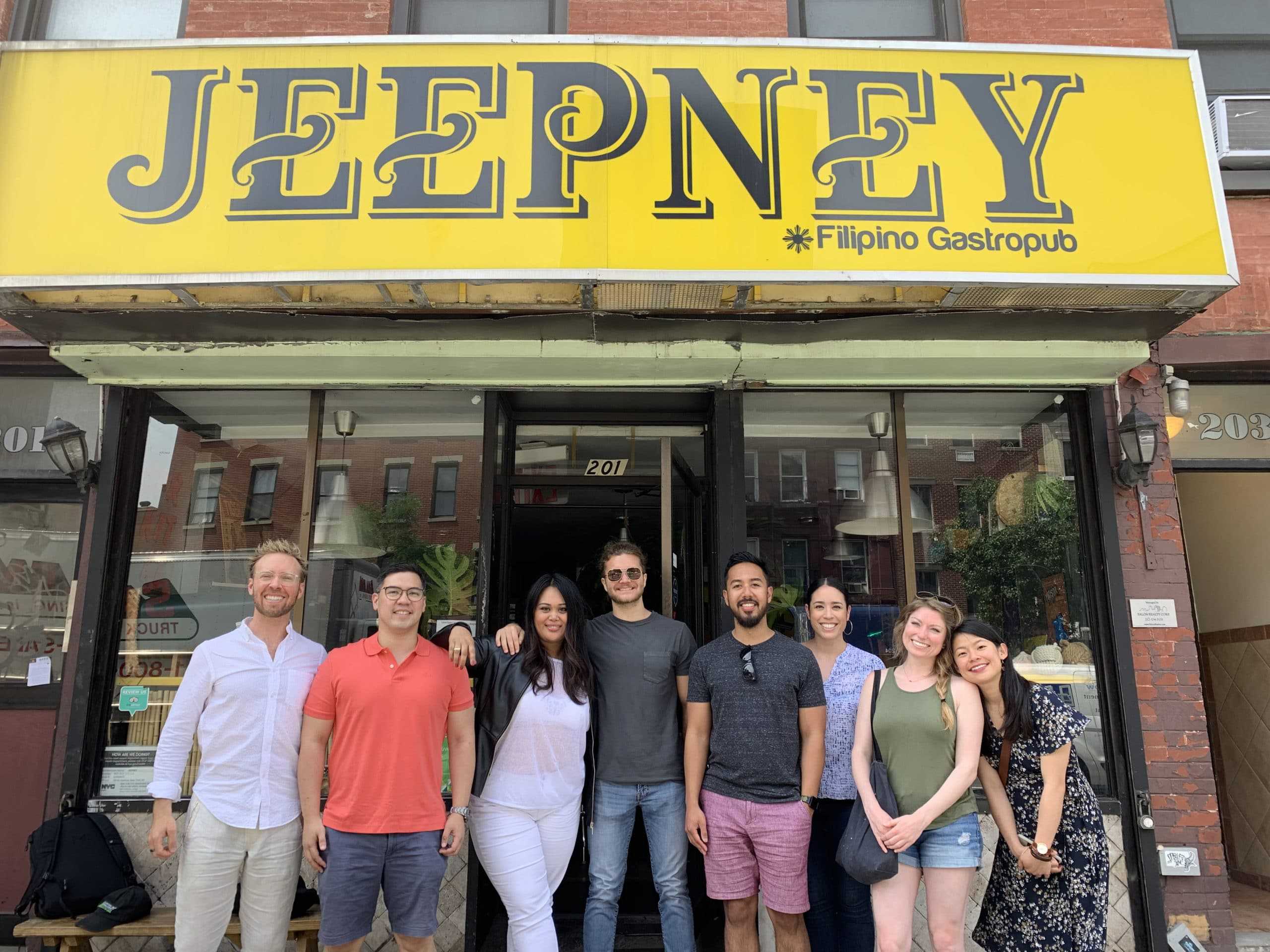 Today I went on a great Filipino food tour in New York City.

This post will share some of my photos and how to book it – or how to lead your own.

Raf was born and raised in the Philippines. He moved to New York City five years ago and describes himself as a “gastro-diplomat.” His goal is to share his country and culture with new friends.

Our walking tour around the East Village had four main stops:

This was our meeting point and first stop for the Filipino food tour in the East Village. It is one of the most popular Filipino restaurants and gets a TON of Instagram attention.

Here are the foods that we ordered and ate at Maharlika in the East Village:

Arroz caldo. It’s the “chicken soup” of Philippine food: you might get served this if you were sick with a cold. This dish is similar to congee from China. Has rice, chicken, more. Tasty!

The bihon or pancit bihon was tasty. A little too much carbs for me (it was mostly noodles), but I enjoyed the pieces of chicken inside.

The tocino is a traditional Filipino dish where they marinate pork shoulder in soft drinks, like 7-Up or Coca Cola. This one was with 7-Up. It was a little sweet! I thought it was a little dry, but perhaps that’s how it was supposed to be.

Simple and tasty. Makes for a good appetizer.

We also had a fried milk fish dish, but I’m not including it because it was a little too much work and my photo doesn’t do it justice!

Nicole Ponseca, the restaurant founder of Maharlika, is at the forefront of Philippines cooking. I got to meet her briefly!

Her book was nominated for a 2019 James Beard award.

This was a crowd favorite! I loved how tasty and crunchy this dish was. I would definitely order this again.

It’s one of my new favorite dishes.

I’d rank the pork sisig equal to another of my favorite restaurants in New York City: Shu Jiao Fu Zhou: The Best Cheap Dumplings in NYC.

Dessert of banana (plantain) in a crunchy wrapper, maybe with honey drizzled on top. I really liked this one. Very sweet so I only ate one.

A famous Filipino shaved ice and ice cream dessert. The restaurant was running low on ice cream, so we had flan on top instead.

This dessert had mixed reviews: some liked it, others did not (myself included).

Other: Jeepney’s and Johnny Air Mart

Jeepney’s: We didn’t eat food here, but we did stop by to take a look.

This is a convenience store that primarily sells Filipino goods.

I was happy to see many pork rinds here, one of my favorite snacks.

The host says the tour is very personal to him, and it is like bringing people to his own home. There are many traditional elements of the tour, like giving gifts to visitors. He also gave us some information about geo-politics and the colonial history of the Philippines.

Raf works as a government consultant who helps businesses understand different regulations in different countries. He does these food tours for fun and to teach people about Philippine culture.

What made you want to start these tours?

Raf: I have been living in New York City for four years, but I was missing food from my home. I invited my friends to join me in exploring restaurants from the Philippines – mainly because I didn’t want to eat alone. So that’s how I started doing Filipino food tours for my friends.

What’s the best piece of advice for someone who is coming on your tour?

Raf: Come curious and hungry! (Editor’s Note: I can confirm, we had a lot to eat! It was a great tour.)

Have you done any other Airbnb Experiences in NYC that you would suggest?

Raf: Yes. Some of us are becoming a tight community now. I particularly like these two:

This was a great tour. We ate a lot of delicious meat. I would recommend it to everyone EXCEPT for vegetarians or those with a peanut or gluten allergy, because it might be hard to customize the tour for you.

If you like food and you’re in NYC, check out my favorite spot for dumplings: The Best Cheap Dumplings in NYC: Shu Jiao Fu Zhou.

Going to Central Park? You need to know this: The Best Picnic Spot in Central Park is Sheep Meadow.