Recently I was bombarded by emails from the Stop Republicans PAC. I do not know how they got my email address!

They used incredibly aggressive email tactics, such as:

These types of marketing messages are typically only seen in spam-type systems, or in direct mail offers like scam credit cards.

So I began to wonder: Is the Stop Republicans PAC a scam?

This post will share some of their email copy, what I know about the organization, and hopefully answer that question.

Harry Pascal is the Founder of Progressive Turnout Project.

The organization is based in Chicago, Illinois and lists their FEC Committee ID as C00633404.

Within this organization, they have created Stop Republicans as “an accountability campaign” according to their mission statement. They say it is “a grassroots-funded effort dedicated to resisting the Republican Party and Donald Trump’s radical right wing agenda.”

So we know for certain that Stop Republicans is a shell group, or sub-organization, housed within the Progressive Turnout Project.

Key leaders in the Stop Republicans PAC include:

Based on data from OpenSecrets.org, the Stop Republicans PAC has received almost $12 million for the 2020 election cycle. I expected their donor list to include a large number of expensive deposits. But their 2020 Contributors list shows the largest amounts at $5,000 from several individuals.

Most of their funding is being spent on Facebook digital advertising. As of February 2020, they reported that they had spent $6.5 million on digital ads.

UPDATE: In June 2020 alone, ActBlue reported that Stop Republicans had raised a whopping $5.82 million on their platform. (source)

I think this is where Stop Republicans really shines as a progressive, political marketing organization.

They use these aggressive direct mail tactics to “cut through the noise” of typical, boring political ads.

Take a look at some of these emails from Stop Republicans PAC to get an idea for their design style.

They also use a lot of surveys. I took these screenshots of their emails in my preferred email program, Superhuman (which works with my Gmail but speeds it up using keyboard shortcuts).

The “Yes” and “No” and “Unsure” buttons all went to the Stop Republicans website, which later would ask you to make a donation.

I’ve got many more great examples as they just keep sending and sending these messages. Clearly they have a big team of copywriters on staff!

These are a few of the emails I’ve received from Stop Republicans account [email protected]:

Please email me if you’d like me to post more. I could even try to make a table which lists them out by Subject, From: name, and message body.

How did Stop Republicans get my email address? I do not know. I even heard from one reader who said the only other person with his email address was Apple and iCloud… but he thinks they got it from ActBlue 🤷‍♂️

In August 2020, Stop Republicans began sending messages which inaccurately showed that 2020 voter records had been changed to reflect people voting for Donald Trump. 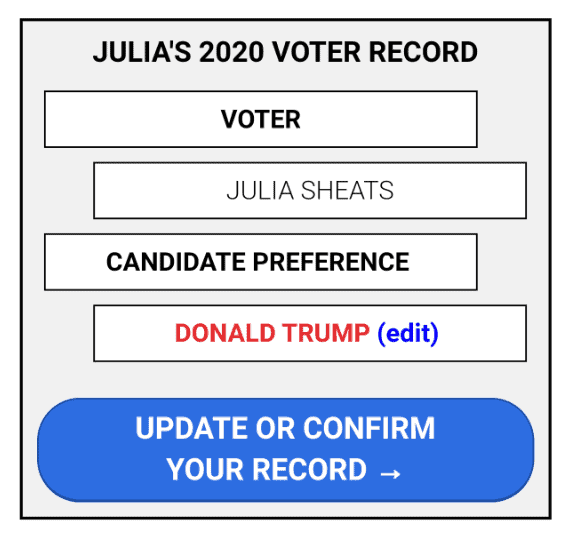 And upon checking our 2020 Voter Records, we noticed yours was inadvertently changed to a [DONALD TRUMP] supporter.

Our research depends on accurate results from our Peoria supporters. Without it, we won’t be able to formulate our data-driven strategy to defeat Trump.

This message appears to be false and misleading. Reader Julia, who submitted that image, reported to me the following:

Stop Republicans is trying to say my voter information somehow got switched to where I am voting for Trump. It also has my maiden name that I haven’t used in 24 years and me living in [REDACTED CITY]. I haven’t lived there in years. I’m also receiving text messages saying the same thing…

The insinuation that our voting information isn’t safe is disturbing. I’m sure people are being coerced into making a donation because they think this email will fix their voting issues. A quick check of my [REDACTED COUNTY] voting info shows that everything is fine and I am set to vote in November. I read your article and just wanted to make you aware. Tactics like this are disturbing.

Now that I’ve done a bit of research about Stop Republicans, I don’t think that they are a scam.

But I do believe they use misleading messages which are sometimes disturbing and false.

I believe they are using these aggressive marketing tactics to combat similar rhetoric from the Trump 2020 team.

In conclusion, while Harry Pascal’s organization is non-traditional and a bit “renegade” (just like Museum Hack, the company I started and recently sold), I believe that Stop Republicans is a legitimate PAC working to elect a Democratic presidential candidate in 2020.

A few months ago I wrote about My Time in the Yang Gang working to support Andrew Yang instead of Joe Biden.

Here’s a picture of me with some volunteers:

Read my article to see what it is like to do phone banking: My Time in the Yang Gang.

This post was last updated on August 15, 2020. I’m still researching this article and this organization.

If you have any information to contribute, please email me and I will update this page.

I reached out to a staffer at Progressive Turnout Project, the parent org of Stop Republicans PAC, with my updated concerns about lack of transparency RE: where funds are being used. Here’s what he said:

Here are a few things people have told me.

I was ANGRY when I got their email: “Barack Obama is so disappointed in you!”
I knew Barry from surfing together. I have given thousands of hours and dollars to Dems since I returned from Khe Sanh in Vietnam War. Voted Democrat in EVERY election while also working for down ballot candidates.
I have stage 4 cancer. I voted for Hillary in 2016, one of only 50% to even vote.
F-ck them all! F-ck you all!
— from H.E.