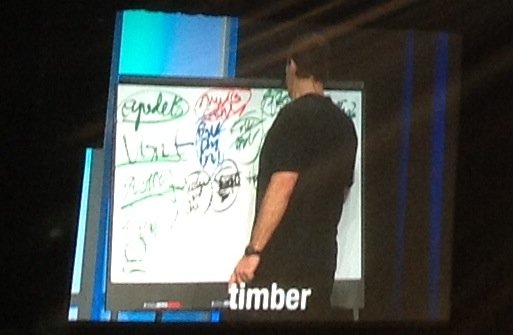 Several years ago, I attended a Tony Robbins four day live seminar. This is my Unleash the Power Within review with many of my candid notes.

Update 2020: Since this original review, I have attended UPW by Tony Robbins several more times. This review is still accurate. Some of the music has changed.

Tony says that 80% of life is psychology and 20% is mechanics. This post focuses primarily on that 20% — the mechanics of Tony Robbins and his Unleash the Power Within seminar.

The seminar used music extensively. For a partial list of songs that I wrote down, see this page — Motivational Music Used by Tony Robbins.

Tony and his staff make good use of call-and-response techniques to maintain audience engagement. Some of the most popular ones that I heard were:

These all worked very well, with over 75% of the crowd participating. Where it fell short was on questions that had open-ended answers. For example:

These open-ended, unique questions made me feel awkward. Call-and-response is most successful when the audience is explicitly led to a simple one or two-word answer. I guess that Tony uses these open-ended questions to powerfully enforce our commitments and pledges. Still, it felt awkward and only garnered approximately 15 – 20% audience participation.

The setup reminded me a lot of an American suburbs mega-church. The lights, video projection, and on-screen prompts would feel at home to Andy Stanley, pastor of North Point Community Church in Georgia.

Attendees of the Unleash the Power Within seminar were often pictured on the video screens in church-like positions: eyes closed, head up, arms extended and reaching for heaven. Many others had their eyes closed, head down, chanting: YES YES YES. I even heard a few people yell “PREACH TONY!!”

Tony Robbins is not afraid of fart jokes, poop humor, etc. Phrases like “Bitch, please.” and “Get that mother-fucker out of bed and in a job!” were not extraordinary during the conference. I found this very pedestrian, but I believe Tony was playing to his audience. He got a lot of laughs and it helped to break the tension at times.

IS IT A LOAD OF HOT AIR?

It depends what attitude you come in with. If you’re a skeptic, I think you would hate it. But if you have an open mind, there’s a lot to be learned. I feel like I was able to take the best parts and tune out those other sections that did not resonate with me.

An example of a speaker script for how a dance break would be initiated.

MUSIC COMES ON VERY LOUD. On screen text that says “Let Tony hear you!!” is put over a video of crowd, lights flashing everywhere, very much like a disco bowling alley. People go APE SHIT CRAZY. I am not good at describing big things like this in text, but I’ll try: Imagine that entire suburban mega-church has just been given crazy drugs, and suddenly the lights are out and you’re in a Disco Bowling alley. Everyone is standing, some on chairs, and everyone is smiling and yelling and clapping with joy. Writing this from my office desk a few days later, I truly miss those state pump dances.

Tony Robbins made good use of an easel, notepad, and big fat colored markers during his presentations. His handwriting and note style are just as bold as you would imagine. What was very interesting is that the words Tony writes are 90% illegible. He is expressing ideas and scribbling with the marker but does not have time for accuracy. For example, on one slide that I remembered, I saw that the word FINANCE was not even slightly legible, SUCCESS looked like a jumbled signature, then there were lots of swirly lines and arrows. Without the context of Tony, it would have made no sense. But the ideas were conveyed better with the aid of these notes. Tony used the notepad and markers in an energetic, academic fashion.

Many people came to the conference on the verge of making a new decision. For example, a 59 year-old Puerto Rican woman that I met was ready to quit her job at a hair salon in order to become an artist. This is a big life change!

A mid-40s tanned Caucasian man said that two decisions that he recently made to improve his life were to start his business and divorce his wife. “She was bringing me down,” he told me.

Another woman I met — 56, from Germany — was trying to flee her mother’s emotional blackmail. “One Christmas, my mother told me ”You can’t go on that cruise, I might not be here when you get back.” That was eight years ago and still my mother makes me feel guilty to miss any holiday away from Germany.” (For the record, this woman was an awesome dancer during the state-pump dance breaks.)

The most successful person I met attending the conference was an 8-year Air Force veteran who is now a consultant for Morgan Stanley. He just put together a $14 million deal outside of Washington, D.C. to host military training exercises. We shared notes after the second night at our hotel bar. His girlfriend chose not to attend. As a strong Catholic, she was turned off by the church-like chanting and cheering.

VIDEO TONY AND OFF DAYS

Tony is only on-site for two of the four days of the conference – Thursday and Saturday, in this case. He has been speaking for so many years that his vocal cords are paper thin, he told us, and his doctor mandates the days off. The off-day host Joseph McClendon was engaging and energetic, but his on-stage character was much cornier than I would have liked.

During Tony’s off days, we watched over 10 hours of his videotaped speeches. This was surprisingly effective. Audience members were happy to interact with the video: raising hands when called to vote, shouting answers when asked, etc. Not as much as when it was a Live Tony, but still: the pacing was accurate and it felt more “real” than watching on my laptop at home.

There were dance breaks in between each videotaped section to maintain a peak state of attention. Occasionally the dance breaks were abrupt, causing Joseph’s voice to BOOM over the microphone as he yelled in a dictator-like fashion to “GET UP OUT OF YOUR CHAIR!” That transition between video and dance break announcement was not polished.

I have a bunch more thoughts: favorite notes, my take-aways, etc… but these notes are most of the mechanics. The stuff I would add would be largely subjective, personal interpretations and things I liked / didn’t like.

2017 UPDATE: I went back to another Unleash the Power Within (UPW) and brought a work colleague of mine. Tony is at the top of his game. (If you haven’t seen his Netflix video yet, check it out.) I think everyone should go to UPW at least once. Just be ready to discard the parts that aren’t relevant to you — and be open-minded to absorb the good stuff. If you’ve read this far, you’re probably skeptical of Tony, which is totally fair. I am a fan of his and my intent with publishing these notes was to say, “Look: he uses some great techniques for audience engagement.” My experience at UPW wasn’t necessarily life-changing at first glance, but I did come away from it with some powerful tools I still use in my life. I consider it a good investment.

ARE YOU THE FOUNDER OR CEO OF A COMPANY? You might like reading my experiences with The Strategic Coach, a CEO coaching program.

ARE YOU A STARTUP OR SMALL BUSINESS OWNER? Feel free to check my marketing and technology tips.

RELATED: My review of The Landmark Forum.