This is a money and policy museum located in the City of London. I went and I got to hold a super heavy solid gold bar. Here’s what I learned. Me holding a solid gold bar. It is kept securely locked inside of a surprisingly well-done case which allows you to lift the bar, but there’s no way it could be stolen. Also gold is hella heavy.

What does the Bank of England do?

They maintain monetary and financial stability to promote the good of the people of the United Kingdom.

Inflation at the Bank of England Museum

Ideally the Bank of London wants inflation to be 2% per year. That’s the target rate assigned by the Government. 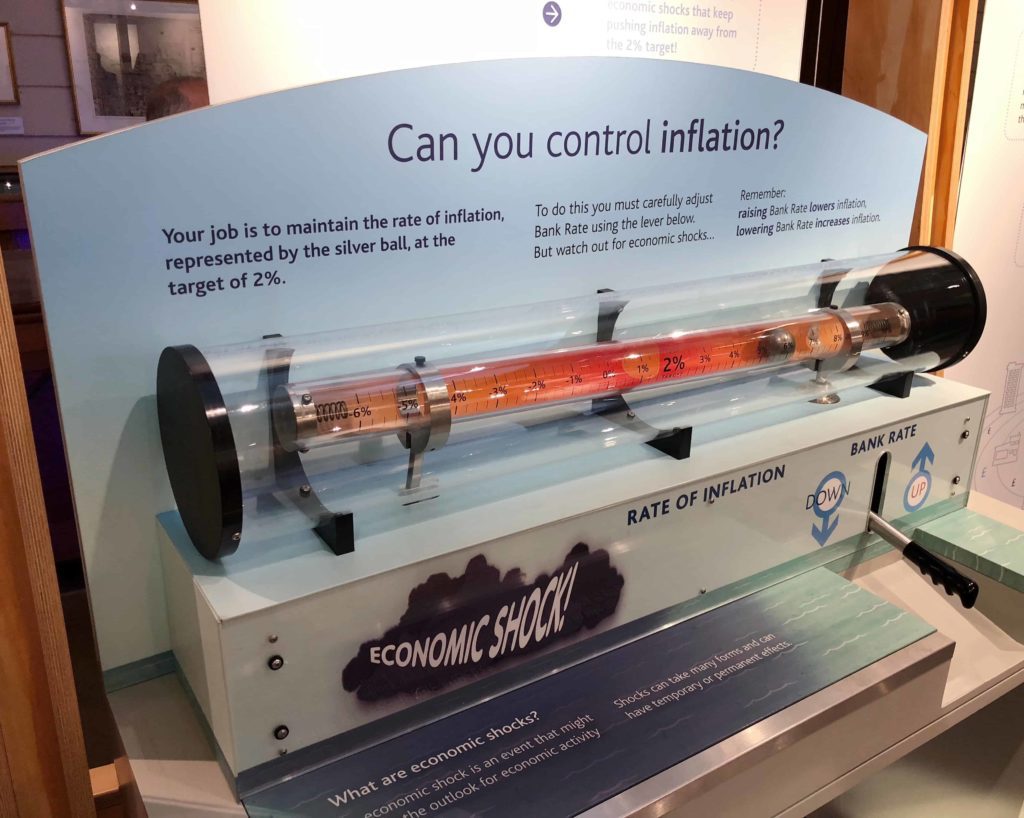 Can you control inflation? A fun game for kids at the Bank of England Museum in London

More Inflation Facts From The Bank of England Museum

At the 2% inflation level, they say the economy is able to grow and create jobs. 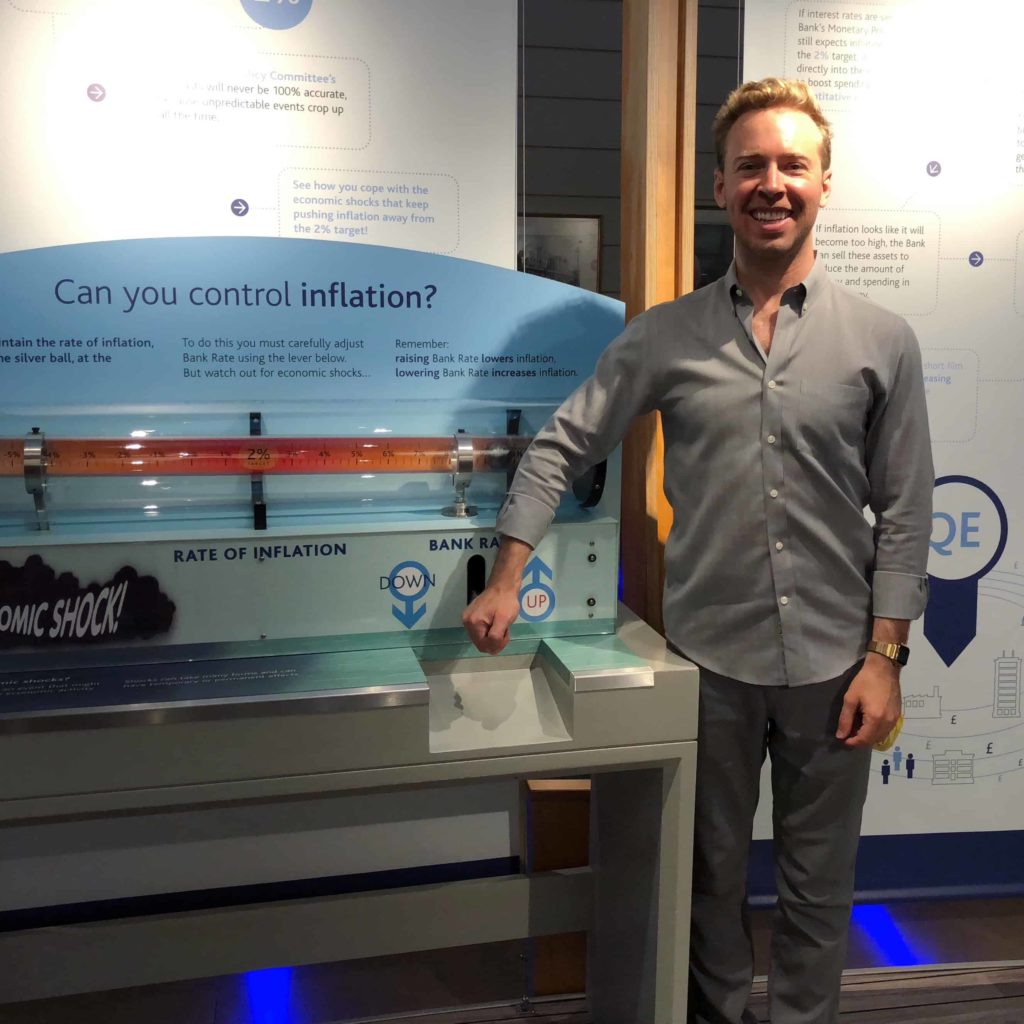 Raising and Lowering the Bank Rate

If inflation looks like it will go above 2%, then the Monetary Policy Committee will probably increase interest rates.

After they raise the interest rates, people tend to spend less and save more. That puts downward pressure on inflation. 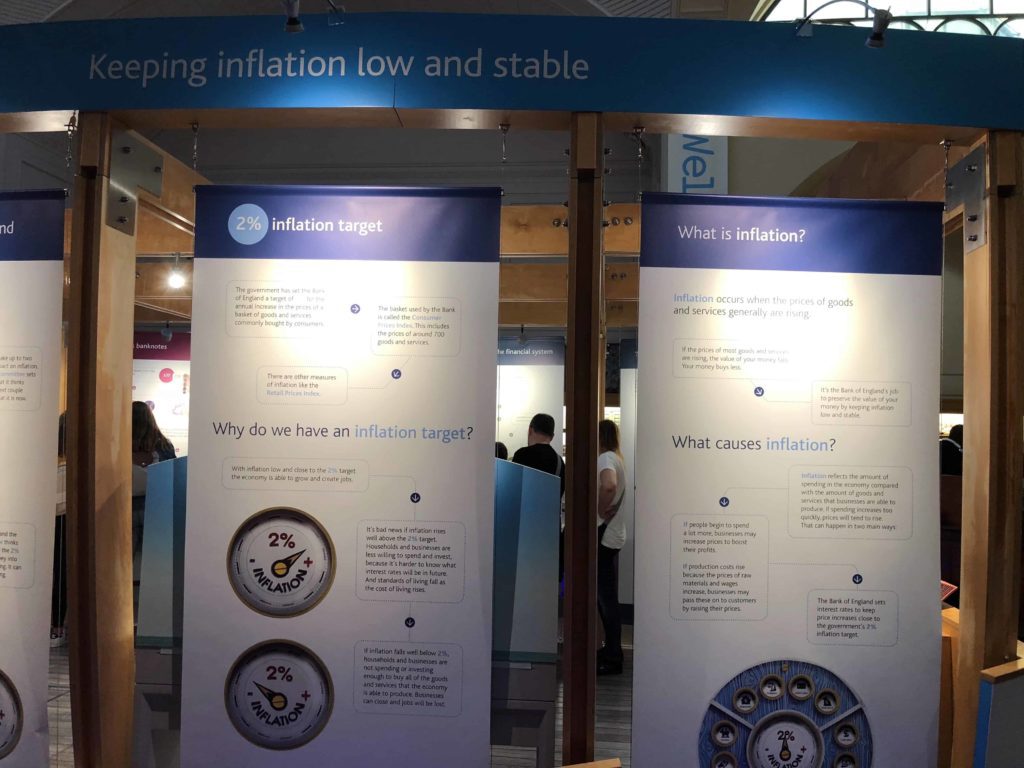 Sample signage found inside the museum which talks about inflation.

Here’s what the museum says about that:

Q: Why is low and stable inflation good?

A: Unstable rates of inflation are costly to households and companies. They make it hard to see how prices of individual goods are changing compared with one another. And uncertainty over future prices makes it more difficult to enter into long-term contracts. Historically, high inflation has tended to be more unstable.

Fun fact: Changes in Bank Rate can take up to two years to have their full impact on inflation. 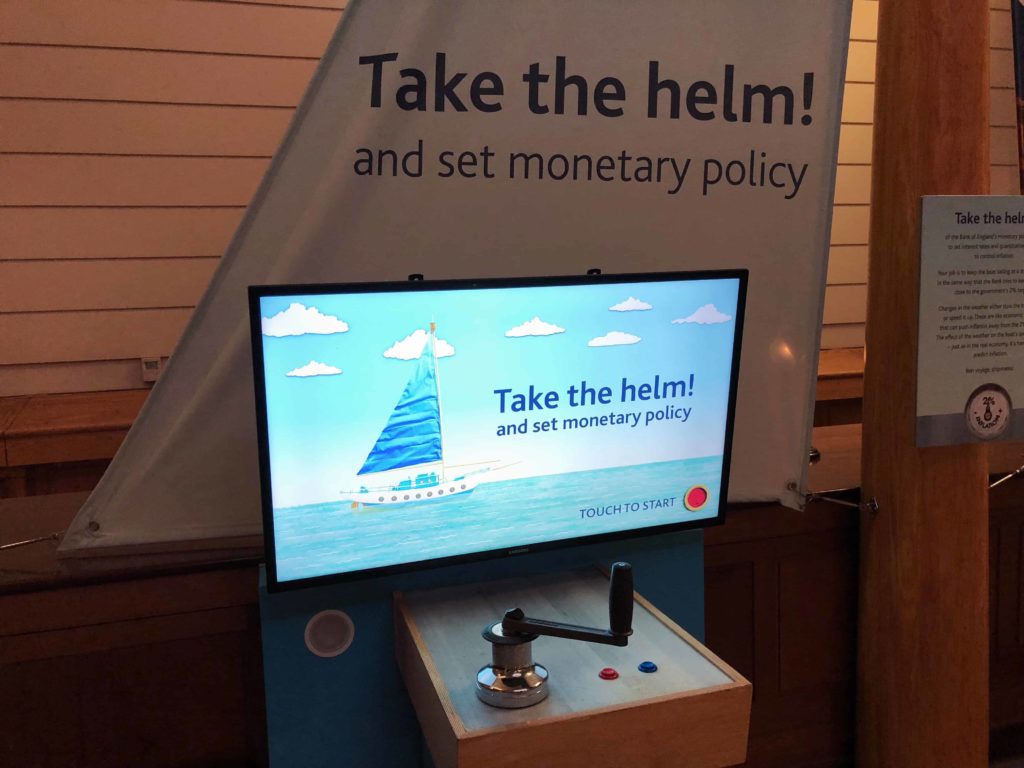 Children are encouraged to “Take the helm of the monetary policy boat” in order to set interest rates and quantitative easing to keep inflation low. 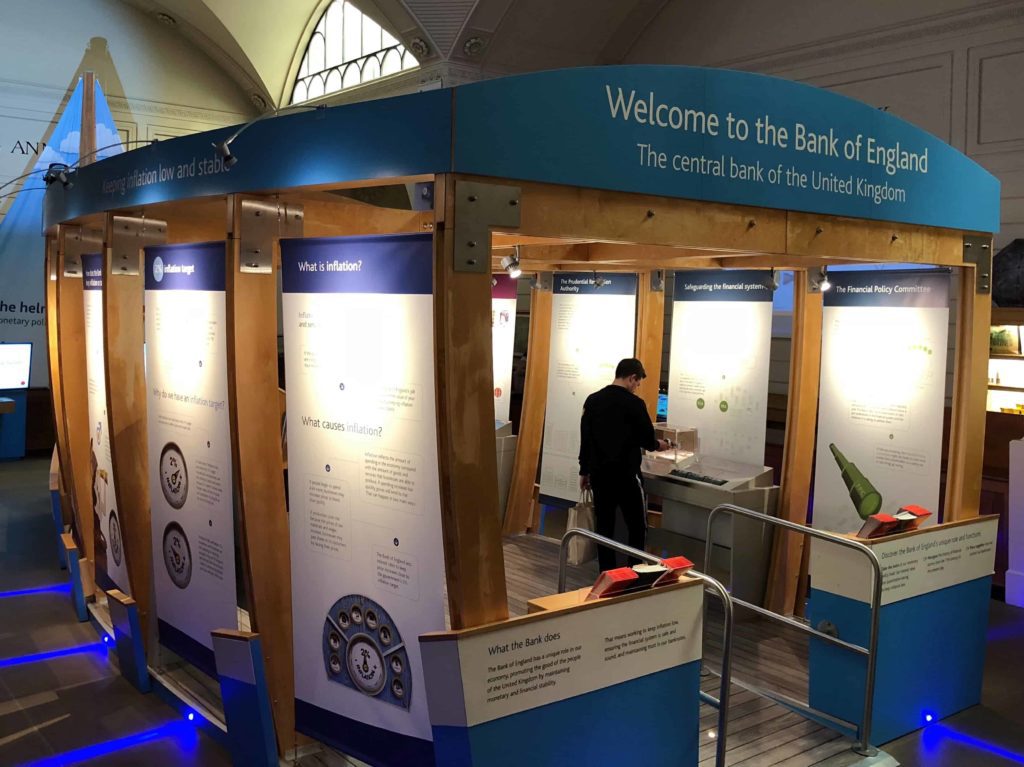 Much of the inflation-related signage is here, near the main entrance of the museum space. I think most people skip it.

If spending increases too quickly, prices tend to rise. This happens in two main ways:

Quantitative Easing is when you inject fake money directly into the economy in order to boost spending. This helps to avoid deflation or maybe a recession. What is the fake money used for?

“The Bank of England creates new money electronically to buy financial assets like government bonds from insurance companies and pension funds. This cash injection encourages businesses to invest and consumers to spend. Increased spending helps get inflation back on track to meet the government’s 2% target.”

Fun fact: Quantitative easing was first used by the Bank of England in March 2009, when interest rates were cut to 0.5%.

Video link: How Quantitative Easing Works, a short film from the Bank of England as linked on the museum exhibit using a QR code.

I enjoyed the 10 minute video about gold and the gold deposits that are underneath the museum. Also the story of the honest Englander who found a secret way into the vaults in the 1820s and told the Bank Directors instead of stealing all the gold! 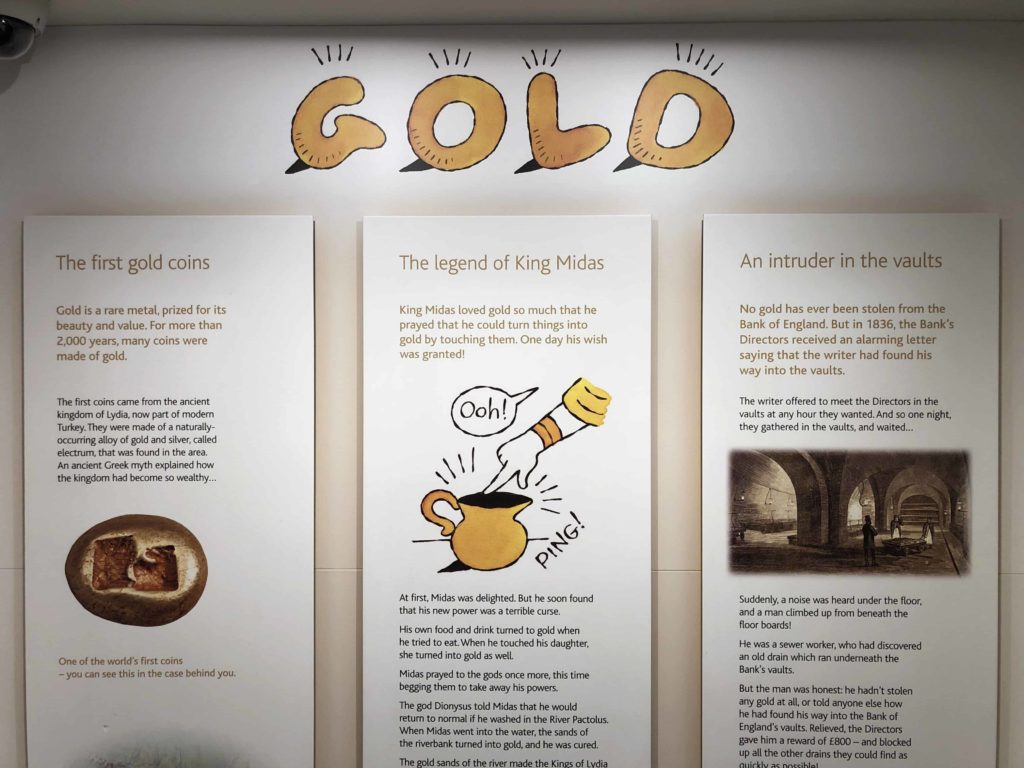 Museum exhibit signage in a small room dedicated to gold 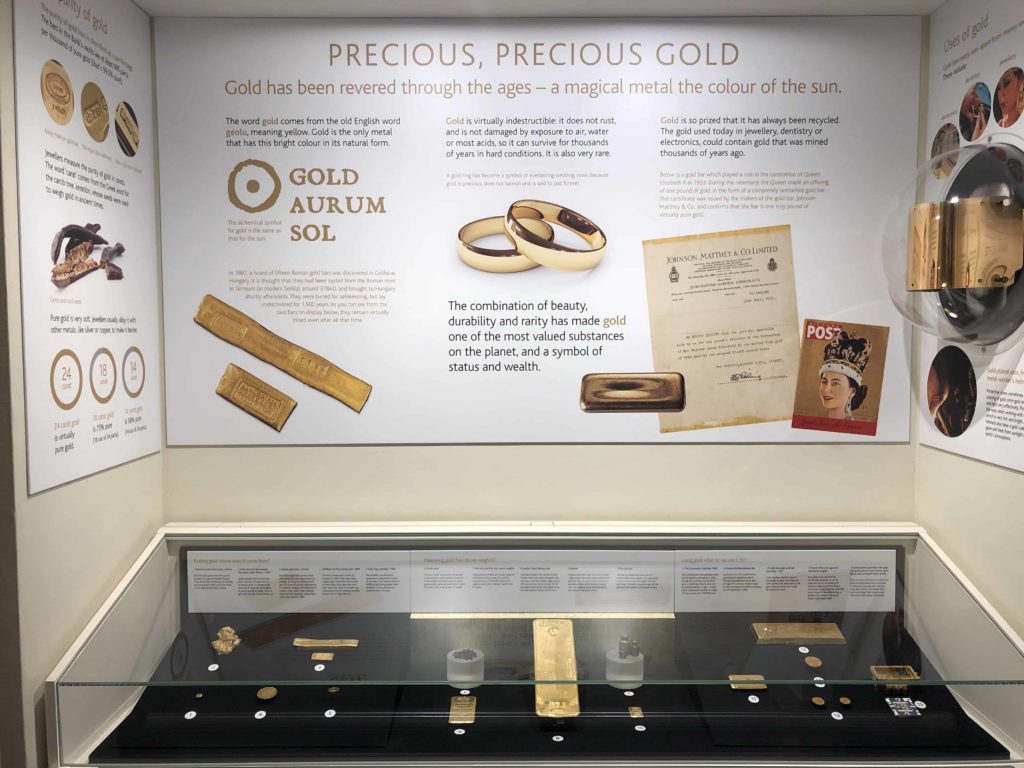 Sample gold bars and gold coins through time, as a means of storing value

Bonus: Handel Was A Baller

Classical composer AND excellent market-timer. He got in and got out of the South Sea Company before it crashed. 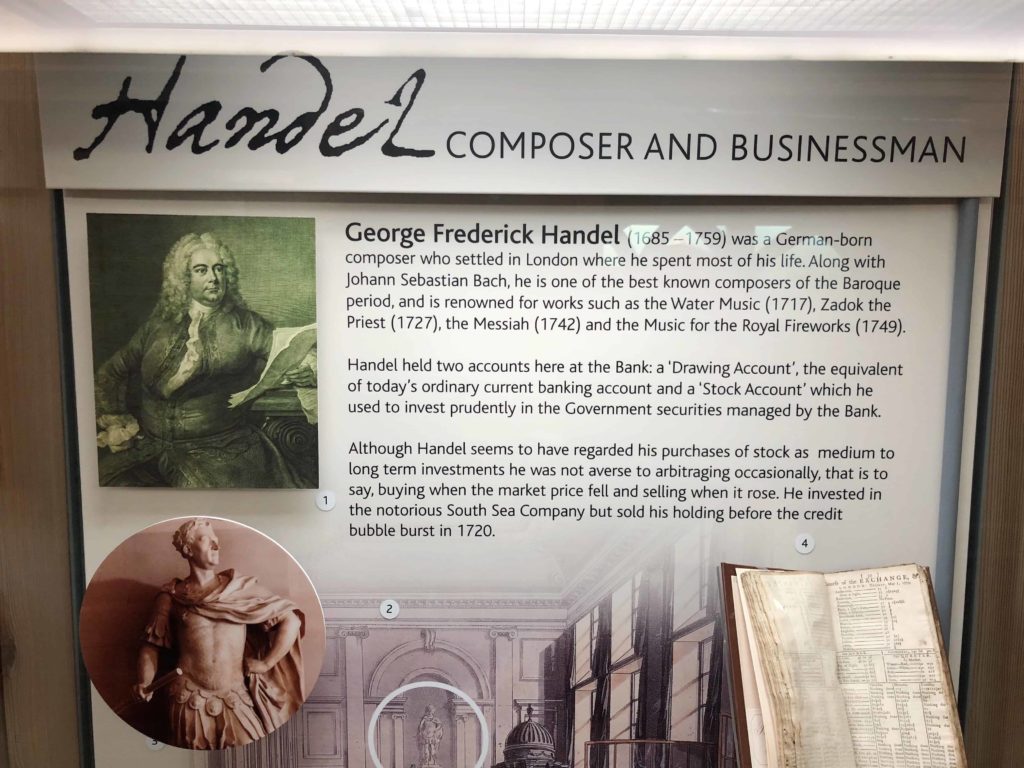 Museum display about Handel, showing some of his account details at the Bank

I liked nerding out at this museum to learn about fiscal policy. I’m trying to learn more about money and finances. Getting a chance to touch and hold a real gold bar felt special. (So special, in fact, that I did it twice!) You should go to this museum if you have an interest in finance or money.

For Families and Children

Many families were playing some sort of scavenger hunt game that they seemed to be having fun with. You can get the free scavenger hunt from the Information Desk at check-in.