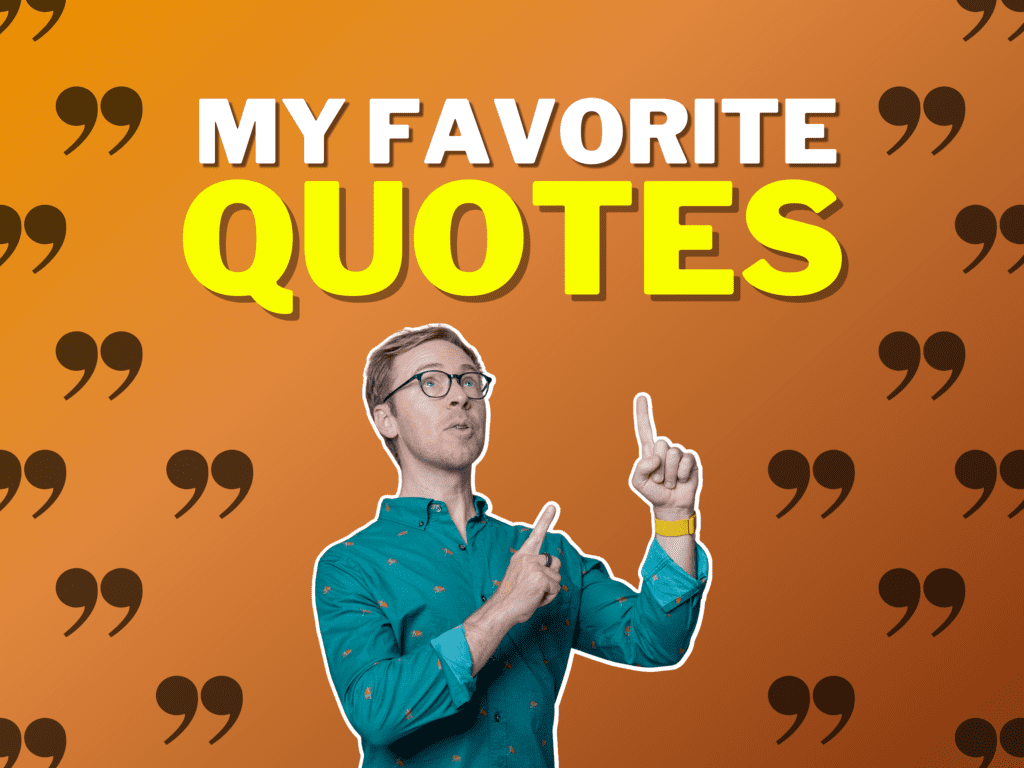 Hi! Nick Gray here. This is an updated list of my favorite quotes.

I’ve included ones about business, entrepreneurship, marketing, inspirational quotes, funny sayings, and even some great ideas.

Have a quote that needs to be added here? Email me and maybe I’ll include it!

“Show me the incentive and I’ll show you the outcome.”

“Buy great companies. Don’t pay too much. Do nothing.”

Stewart and Glassman, “The Motives and Methods of Corporate Restructuring: Part II,” as quoted by @RobinWigg

“Someone just said Gary V is the youth pastor of capitalism and I can’t stop thinking about it.”

“The answer to, “What idiot did this!?” is almost always, “A smart, well-intentioned person making tradeoffs you hadn’t even considered.”

“For tax purposes, my family is putting me down”

“There are three ways a smart person can go broke: liquor, ladies, and leverage.”

“Pro tip for winners: The rule of texting someone busy and asking if they are free for a call is to be free for the next 15-30 minutes immediately after you send the text, and indicate if you want that “now works, should be a quick call.”

“Every business is like an impressionist painting: it looks simple from far away, but chaotic from up close.”

“You know when someone is super passionate about something and their eyes light up?? All I’ve been doing for my entire adult life is following people that have it and it’s never really let me down.”

“Rome wasn’t built in a day, but they were laying bricks every hour. You don’t have to do it all today. Just lay a brick. That’s how you build an empire.”

“Magic is just someone spending more time on something than anyone else might reasonably expect.”

“I began to realize how important it was to be an enthusiast in life. If you are interested in something, no matter what it is, go at it full speed. Embrace it with both arms, hug it, love it and above all become passionate about it. Lukewarm is no good.”

“As you become an adult, you realize that things around you weren’t just always there; people made them happen. But only recently have I started to internalize how much tenacity everything requires. That hotel, that park, that railway. The world is a museum of passion projects.”

“I have no idea where this will lead us, but I have a definite feeling it will be a place both wonderful and strange.”

“Imagine living in 1940 and saying, I don’t want jets! Because jets are developed by millionaires! And who needs jets, we already have trains! And jets aren’t even impressive, we’ve had planes for 40 years! So many have lost their thirst for progress and innovation.”

“Looking at a crowd of strangers brings me almost as much awe as looking at deep field images of the universe. Every person in the crowd is a galaxy of memories, dreams, hopes, fears, longing, sadness, regret, love.”

“Some things you can only see from a distance.”

“The fear of death follows from the fear of life. A man who lives fully is prepared to die at any time.”

“A relationship is about inventing your own language. You’ve got the jokes, you’ve got the songs, you have this anecdote that’s going to make you laugh three years later. It’s this language that you build. That’s what you mourn for when you’re losing someone you love. This language you’re not going to speak with anybody else.”

Cèline Sciamma interviewed by Alexandra Pollard in The Independent

“Behind every great relationship are difficult and uncomfortable conversations that we rarely get to see. Great relationships do not just fall into our laps. They require people to move through their fears and insecurities and do the hard work to move wounds to healing.”

“I’m often reminded of the Sex and the City episode where Carrie asserts you’re always looking for a boyfriend, an apartment, or a job. Hadn’t realized that when you stop looking for the partner or the job, you just look at real estate on your phone for the rest of your life.”

“The first thing we do in my house is say do you want empathy or do you want a solution?”

“You have lived a successful life if, as you grow older, the people who you hope love you actually do.”

“A problem well-stated is half-solved.”

Charles Kettering, inventor and head of research for GM

“If someone is speaking to you in a foreign accent, they are smart enough to know two languages and are brave enough to do their job in their second.”

“We need a new category of books that are 40 pages, excellent and tight, instead of forcing authors to stretch valid/interesting concepts into 220 pages reaching crappy books.”

“Support your friends, listen to their ideas. Go to their events. Buy what they’re selling when you can. Share their posts. Celebrate in their victories & remind them of their importance after their failures. Push them. A little support can go a very long way.”

“Once again I am recommending that Coinbase buy Peloton for cheap and use the energy output from its riders to power bitcoin mining.”

“A coach is someone who can give corrections without causing resentment.”

“Cars should have a second, friendlier horn to say thank you, or if you want to let people know you drove past a cool animal.”

“A good teacher does not teach facts, he or she teaches enthusiasm, open-mindedness and values.”

Mathematician and philosopher Gian-Carlo Rota on teaching, via James Clear

“To collect taxes, Christian IV of Denmark asked captains of ships crossing the Øresund to estimate the value of their cargo, which was applied as the tax base without further audit. But the king also claimed the right to buy the entire cargo at exactly that price.”

“Travel is fatal to prejudice, bigotry, and narrowmindedness, and many of our people need it sorely on these accounts. Broad, wholesome, charitable views of (people) and things cannot be acquired by vegetating in one little corner of the earth all one’s lifetime.”

Mark Twain, The Innocents Abroad, as quoted by Kelly Bailey

“Smart people need a safe place among their peers to think about their confusion out loud.”

“‘Stay in your lane’ is the most anti-intellectual, anti-progress rhetoric I’ve ever heard. Go outside of your lane. Far outside of it. Live there for a while. Tell us what you see.”

“You really have to respect the versatility of mint. Good in cocktails, chocolate, with meat, in ice cream, as tea. Just at home in a salad as it is in a cigarette. A whole genre of sweets that are just called “mints”. And it’s the only mainstream toothpaste flavor. Insane herb.”

“Yesterday I overheard a little kid asking their mum why I was using a wheelchair, and the mum simply replied “Well maybe his legs need a bit of extra help. You can ask him if he’s happy to tell you more.” No shaming the kid for asking, no treating disability as a hush hush topic.”

“DM that random actor whose performance you’re enjoying in that thing you’re watching. Maybe they ignore you, maybe you pause their “I should quit already” spiral of the week. TBH it’s never felt harder (esp for some of us character actors) to pursue this often soul crushing biz”

“Someone asked me to name 2 structures that hold water. I was like, well dam.”

“My boss asked me why I only get sick on work days. I said it must be my weekend immune system.”

“To avoid straining your eyes when you’re continuously working, follow the 20-20-20 rule. After 20 minutes of work, look at something 20 feet away, then spend 20 years in the forest.”

“If you’re cremated after you die, you can be put into an hourglass and continue to participate in family game night.”

“Me when a study confirms my prior: I knew it!

Me when a study disconfirms my prior: Hmm, what’s the sample size/power of this study, are there any possible confounders…?”

The end! Have a quote that needs to be added here? Email me and maybe I’ll include it!