My Review of PodShare in Los Angeles, A Boutique Hostel

My Review of PodShare in Los Angeles, A Boutique Hostel

For $40 per night plus tax, you get a lot: a clean bed, towel, and access to a communal kitchen, bathrooms, and co-working space right in the heart of the Downtown LA arts district.

Verdict: Great value. Hard-working and nice owners. If you’re on a tight budget and need a place to crash in LA for a few nights, I recommended it. 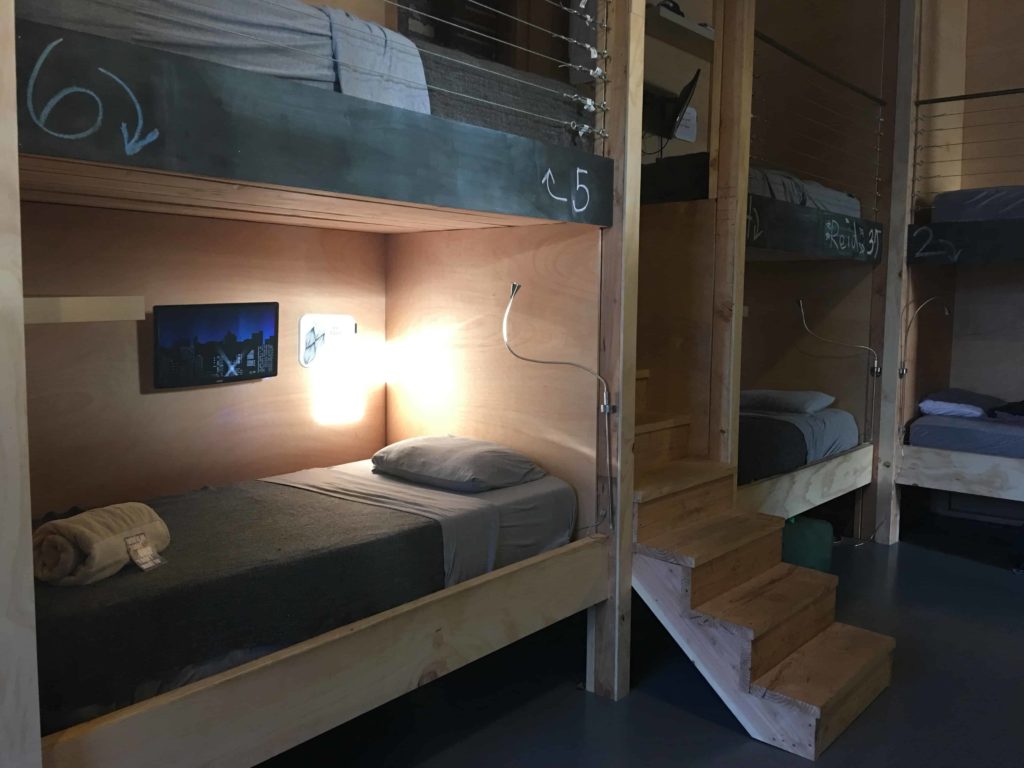 PodShare was founded in 2012 by Elvina Beck. She is supported by Kera Package who runs Operations. They have two locations: Downtown LA, with 16 beds, and West Hollywood, with 2 beds and lots of co-working space. Additional PodShares are planned to open this year in LA.

I paid for my room. This is not a sponsored post. When I arrived, I asked Elvina and Kera if I could take pictures and interview them for this blog. I’ve spliced in some of their comments with my photos below.

Elvina told me, “This is boutique. We’re not a faceless mega-hostel. We want it to feel like your local bar, but with beds. Like Cheers. With beds. You should be able to walk in, do a lap, and say: OK, I got it.”

Q: Why the focus on memberships?

Elvina again: “Access points. It’s less transactional. Memberships make it feel more like a community. The bigger picture involves many Podshares, all around LA, where people can pop in and out. Imagine stopping in to use the bathroom and doing some coworking while you’re out, or meeting your friends in our communal space before a night of partying.”

(Nick’s note: I think it has to do with zoning. If they marketed Podshare as a true hostel or hotel, I’m guessing it might need a different set of approvals from the city or state. Saying that they sell memberships and day-passes, instead of beds, could be a very admirable way of skirting these laws. Much respect if that’s the case: it is an inventive, entrepreneurial solution.)

More about memberships, and kicking people out

Kera, who runs Operations: “We approve 99.9% of applicants for their first night. After you submitted your order, I looked you up and saw your website, and I approved you. But longer term, someone has to stay here and we have to approve them. Everyone asks us: What’s the worst case scenario with a guest? But it’s really not that bad. It’s a horrible snorer. And we have to ask them not to stay, because that can be disruptive to others.”

Alternate view of pod beds at Podshare in Los Angeles 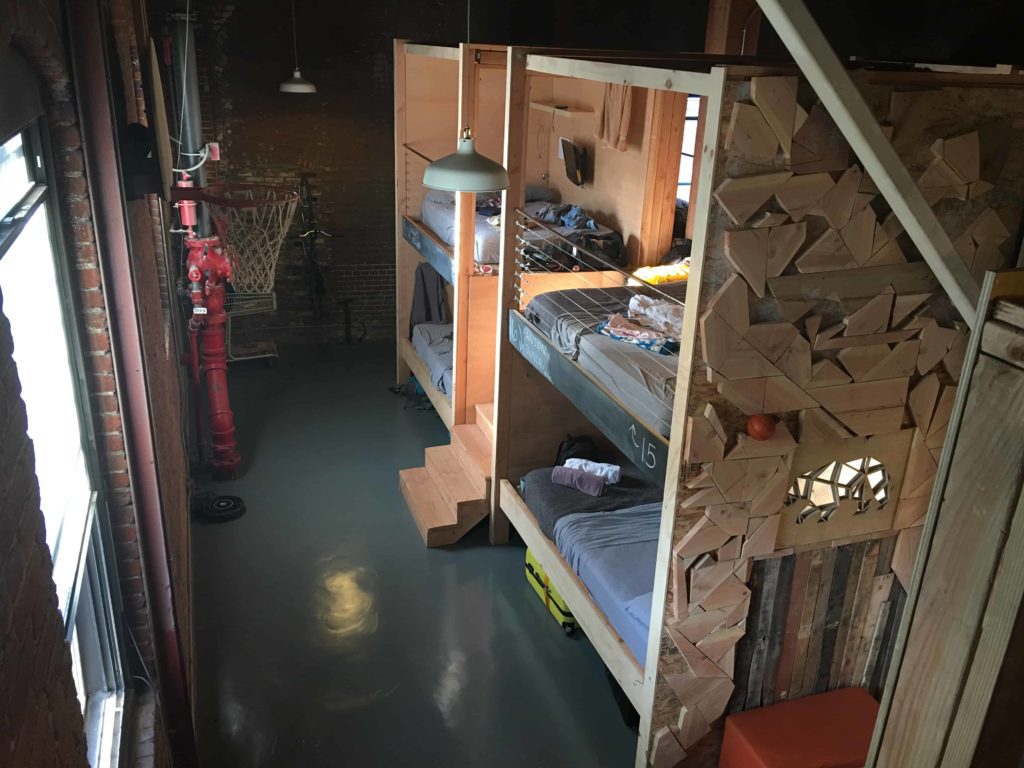 View from coworking space at Podshare LA in Arts District

PodShare is NOT marketed as a hostel. They call it “Membership Based Co-living.” I’m sure that the owners hate that I titled this post “Podshare Hostel.” During my visit, Elvina told me, “We’re not a hostel. A hostel has dozens or hundreds of rooms. They have bunk beds and single bedrooms. This is a community, and you can access our network of locations in the city.”

But after thinking about it and spending one night there, it certainly felt to me more like a hostel. Shared living, shared kitchen, nightly rentals. I feel that PodShare would be best classified as a boutique hostel. 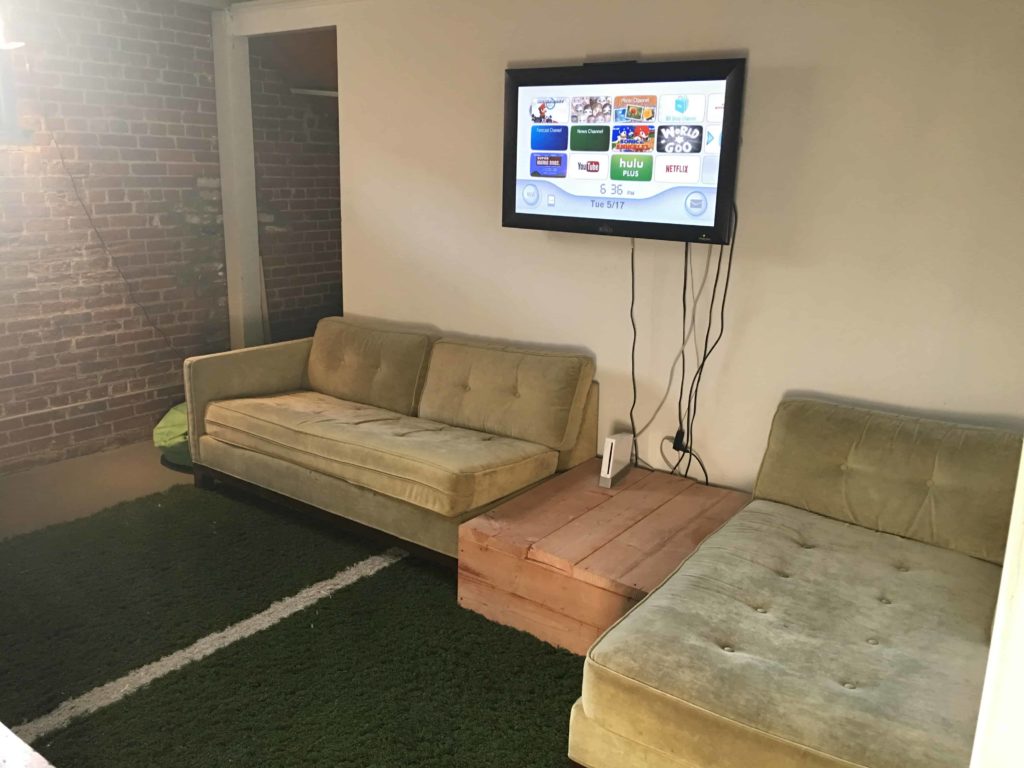 Entertainment area with a Nintendo Wii and TV screen, also some DVDs and books Sink area outside of bathroom, including toiletries for common use 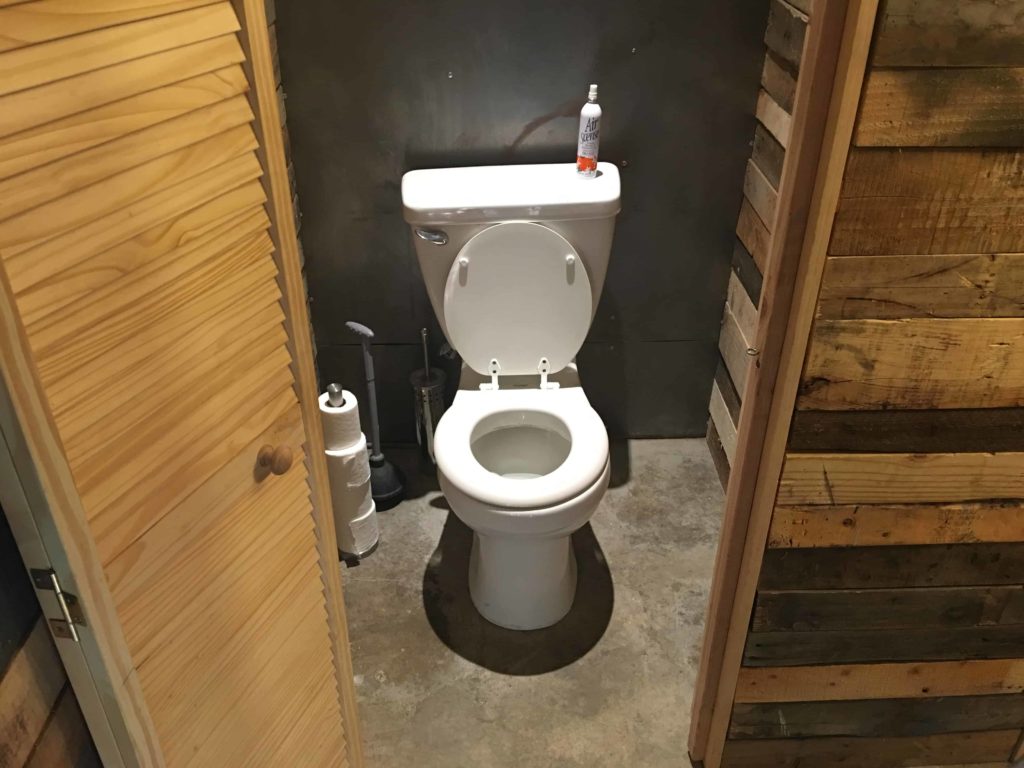 1 of the 2 shared toilets in Podshare LA. The doors were flimsy and didn’t feel very private. 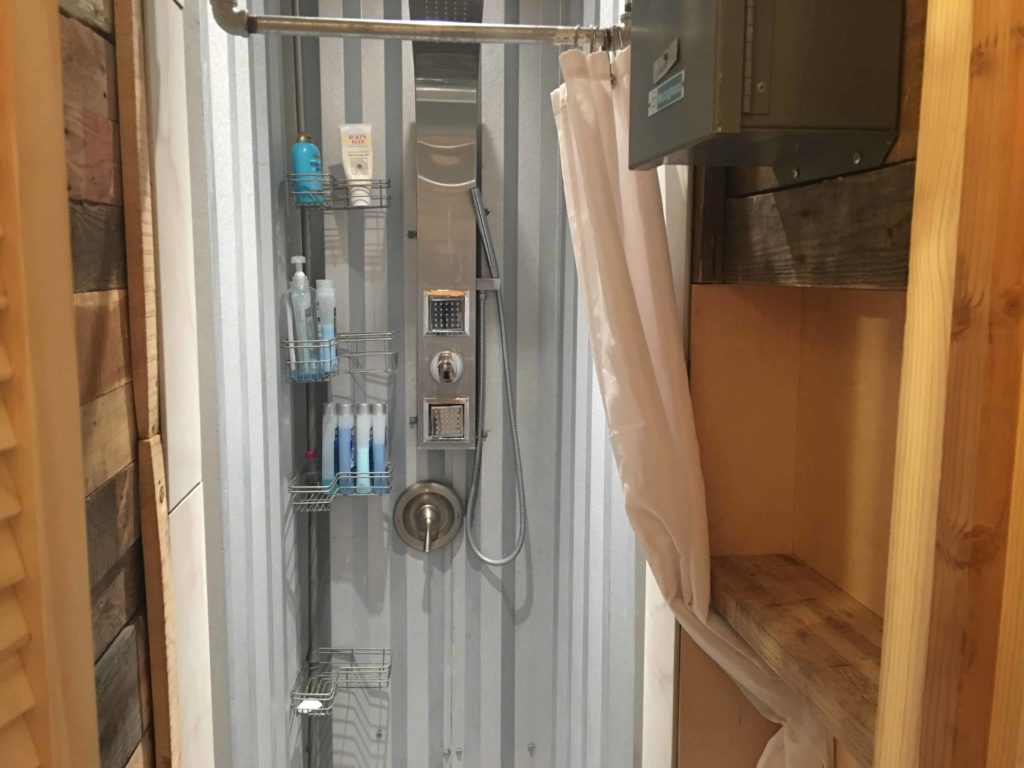 Shower area, there were 2 of these.

They built the shower interior from corrugated aluminum, intended for outdoor use but waterproof and perfectly suitable for the space. I liked it. 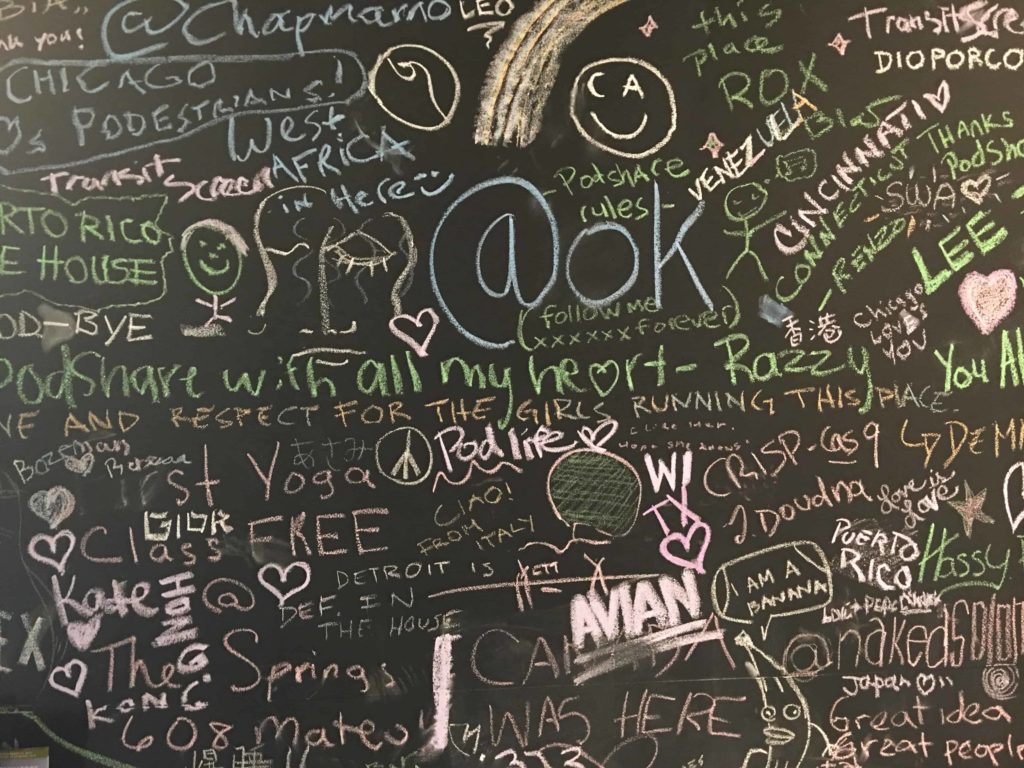 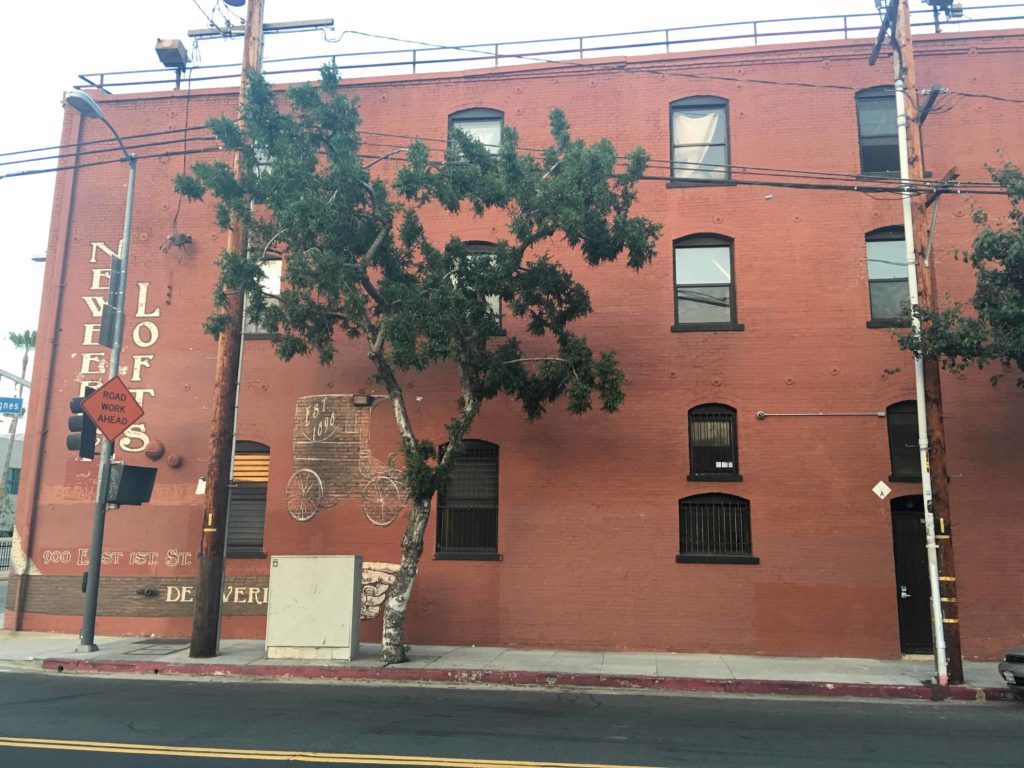 Update July 2019: Podshare is getting a lot of press recently because of a viral video on their new San Francisco location. The founder has been thinking and working in the co-living space for a long time. I would not bet against her!