Indie.vc believes that the unicorn fundraising model has ruined a lot of businesses. “With each round of funding, you die a little bit more.”

I attended a presentation by Bryce Roberts on a rainy Friday morning in Manhattan to hear about an alternative way for startups to raise capital. We met near Grand Central Terminal at 8am, 8 February 2019. James Nord from Fohr would later make a guest appearance and offer a testimonial as a successful example.

Bryce started with a joke: “Are you all ready to trash some VCs?” 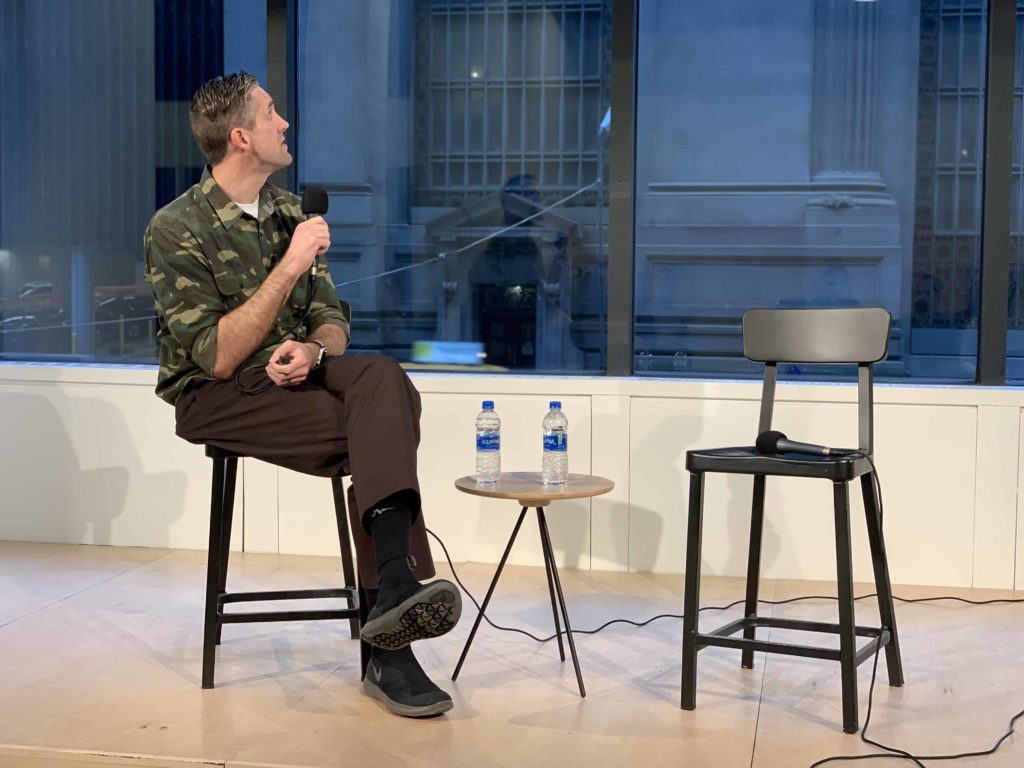 Bryce Roberts, the Founder of Indie.vc, looking up at slides during the NYC road show for v3 this morning

A halfway house for the unfundable

Venture loves to fund monopolies. That plays out in the first act of Indie.vc in press coverage. But we think there are lots of ways to build big, meaningful companies. There are concentric circles where you’ve got a good company but a bad investment.

The last funding round you’ll NEED to raise

A lot of the companies that are building and growing get overlooked because they’re not raising. We think there can be even more of those if they had a partner along the path.

These trends don’t seem to be slowing down any time soon. 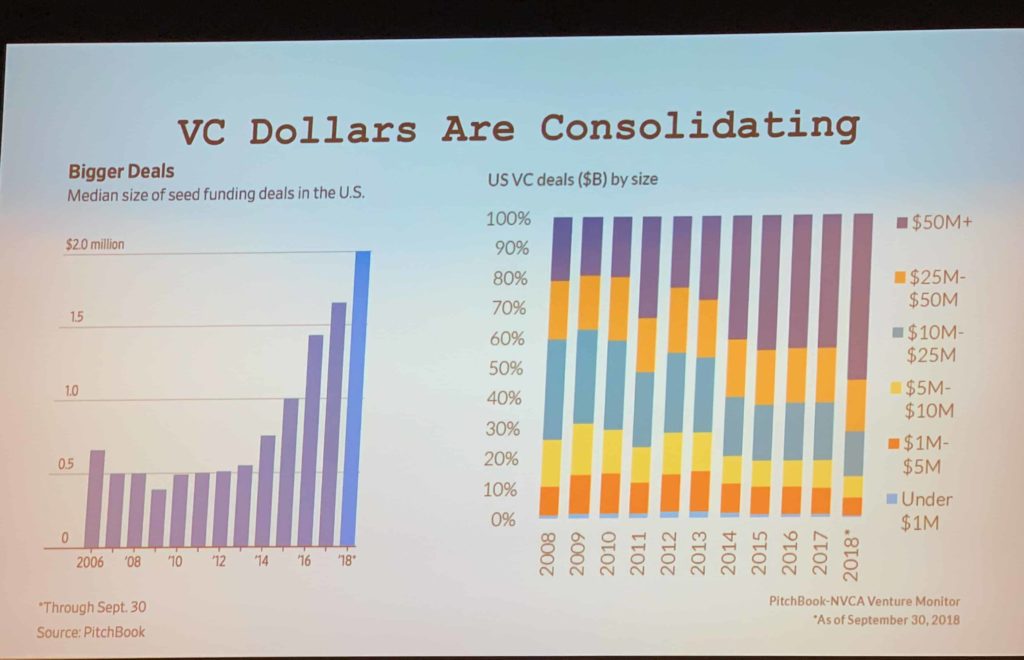 2018 was a banner year for venture. But fewer and fewer seed rounds are happening.

Related: at the bottom of the Indie.vc FAQ, you can find this burning unicorn animation.

What we’ve found is that there’s value in the community of this. We’ve got this alternative universe of entrepreneurs who value building a company this way. They’re surrounded by people that are scaling more quickly than those telling them to raise another way.

What you get besides money 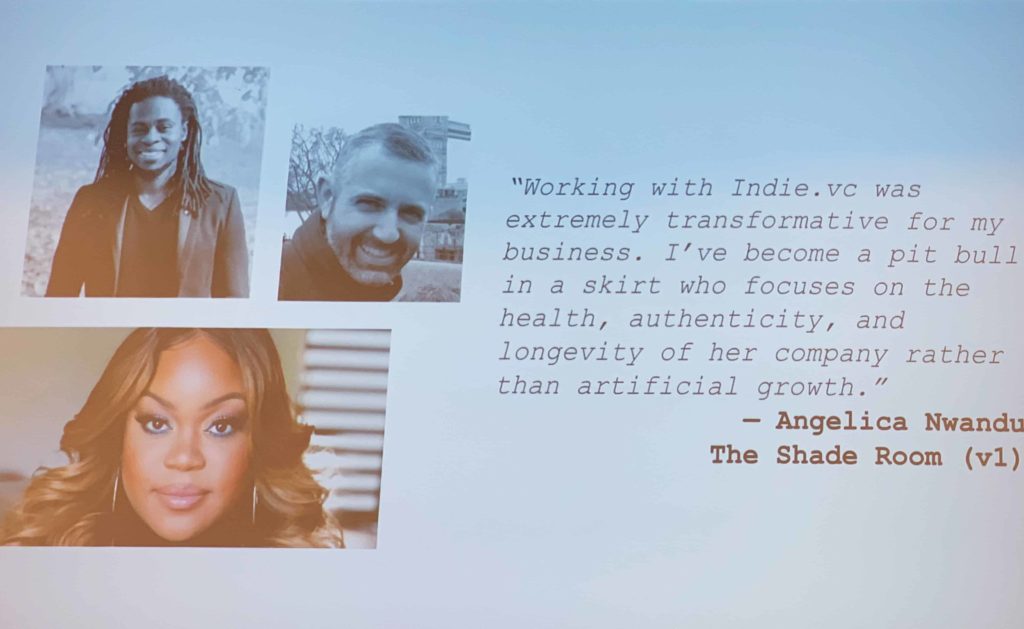 Success stories from the v1 cohort. Angelica Nwandu has built an amazing business with lots of profits today.

Bryce invited James Nord from the v1 cohort to the stage to have a dialogue with him. Bryce and James Nord on stage. “I wear a suit every day for no reason.”

Going through a difficult time, James and his team switched their focus from fundraising to sales. This gave them more cash flow runway. But some external forces complicated things further, like investors calling their convertible notes.

I would have done anything in those early days to raise a traditional round of VC, like $3M. But just focusing on sales was huge for us. We still have a scarcity mindset when it comes to money in the office. We haven’t raised in three years now. Our team knows it is our money on the line.
James Nord, Fohr

James had a very funny comment about how you can sell your company for $30M, but if you’ve raised a VC round, with liquidity preferences… there’s a chance the founders can walk away without a cent of money. But “you will get lots of congratulations on Twitter and Facebook.”

James: 5. They took a chance on an industry that venture had no interest in. A founder that had no prior experience (and weird hair). The community and everything we’ve gotten from that has been huge.

At 8:53a, we took time for questions and answers from the audiences. Here are some of those.

Bryce, can you talk about your LPs?

10 year life, three 1-year extensions. Named individuals from the tech community and institutions. High-quality LPs. For our third fund at OATV, we raised $85M. When we shifted the model for our fourth fund, we lost the majority of our investors. LPs tend to be a trailing indicator of interest. But now we’ve aligned our investors.

James, can you share about your board meeting? On the agenda.

Bryce is great because he’s like a therapist, asking me, “How do those sales make you feel?” Bryce and I talk every week so he’s pretty plugged in on what’s going on. It’s more about larger projects. And at the end, we’ve got things that are keeping me up at night.

James, talk about the coaching. What else happened after your first funding from Indie.vc?

We nearly immediately went to the retreat. Lots of speakers and other entrepreneurs. I’ve always been sales-focused. We shifted to think of ourselves more as a sales organization. The first week we were in SF, the Etsy guy made a speech about listing out the products you’ve got and thinking which ones make the most money. That seems obvious but was big for us. And there’s a sense of camaraderie but also competition. We all go around the table and say our revenue and profits from the past three months, and I found that driving me. Answering questions after the presentation.

This has almost been like an AA meeting, saying “I’ve been this many months sober from Venture Capital.” How many of the companies that come to you come in that situation?

Bryce: Almost half come with the VC mentality, the other half have actively avoided it. They come with a need for finance or something else. Their complacency can kill them, because they don’t have a way to measure their progress or measure against other companies or anyone holding them accountable. The first group had a lot of companies who went through accelerators. We had to tell people, this is NOT a place where you raise money from us and then we help you raise more if you’re not profitable and in a reasonable place.

James: It’s like a boot camp. A lot of founders see sales as beneath them, to pick up the phone.

Bryce, have you thought about raising money internationally, in Euro communities or other? And then this blitzscaling plan is used for super ambitious entrepreneurs. How do you screen for ambition to make sure you’re still getting the right people?

International, no. It’s not something I’m super anxious to do. We’ve got a lot more to prove in the model. But everything we do, we try to open source it and transparent about it so others could do it elsewhere.

For ambition, absolutely. We look for people that are frustrated by the system but there’s nothing else out there. Latent ambition and they want to unlock more. We look for people who have experienced that before. But also I’ve been an investor for the better part of 20 years now, so I’ve built some skill around that filtering.

Bryce, do you have international companies in the cohort now?

No. We have some distributed teams but nobody fully international.

Bryce, can you talk about the fundamental business model characteristics that fit this model well?

If you plan to fund a decent part of your growth through profit and cash flow… We want to see fundamental margins. Listening to how you talk about business. If I think about what isn’t a fit for Indie.vc, things that require a ton of upfront R&D before it can get commercialized. We don’t really rely on recurring revenue models, or we’re OK with lumpy revenue. Not dependent on “Winner take all” models. But there isn’t a formula. We do want high gross margin, tech or tech-enabled. Not trying to reinvent the wheel on business models.

Bryce, how do entrepreneurs deploy the capital they raise?

They tend to be feeling the pain of something so they use the money to solve that. They come with a hiring plan of six and we tell them they can take two. We feel like a lot of entrepreneurs are selling a lot of that optionality just so they can make a few hires. With Fohr, they wanted to hire a bunch of people, get a new office, etc. But working with us they were able to take out a loan for the office, for example, instead of giving up equity.

James, can you talk about that sales team? Did you ever build that out?

The first sales team we had happened to be two Australians visiting and living in an apartment next to our office. We could hardly pay them at first but we worked something out. Those two women have since gone on to bring in over $20m over the past few years.

Bryce, how do you help the companies think about when to be profitable and when to reinvest the money back into the business?

We have a default that nobody goes out of business taking profit too soon. But talking about cash flow is much more nuanced. Talking with them about how to leverage that, when to be more aggressive in spending it, etc. When we do those monthly 1 on 1s, there’s a form you fill out, we have a dashboard, and we help you get a fundamental feel for what the levers are in your business.

James: We’ve operated in the scarcity mindset for a very long time. Last board meeting was around: Am I being too cautious? Now we’re talking about taking more risks.

It was a well-run information session. There are some pretty powerful success stories in this model that Bryce and Indie.vc are pioneering.

Lots of attention is on this model after this New York Times article came out a few weeks ago.

If you want to apply to Indie.vc’s v3 round, do it soon because applications close on 1 March, 2019.

Here are the bagels that were offered as part of the meeting. 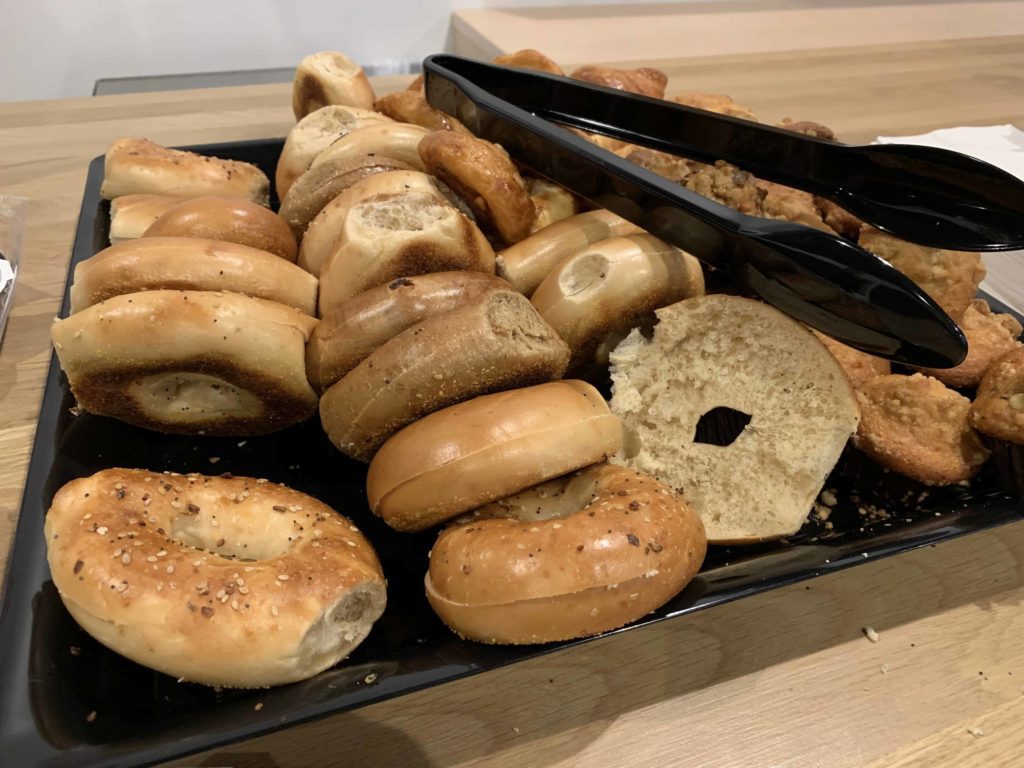