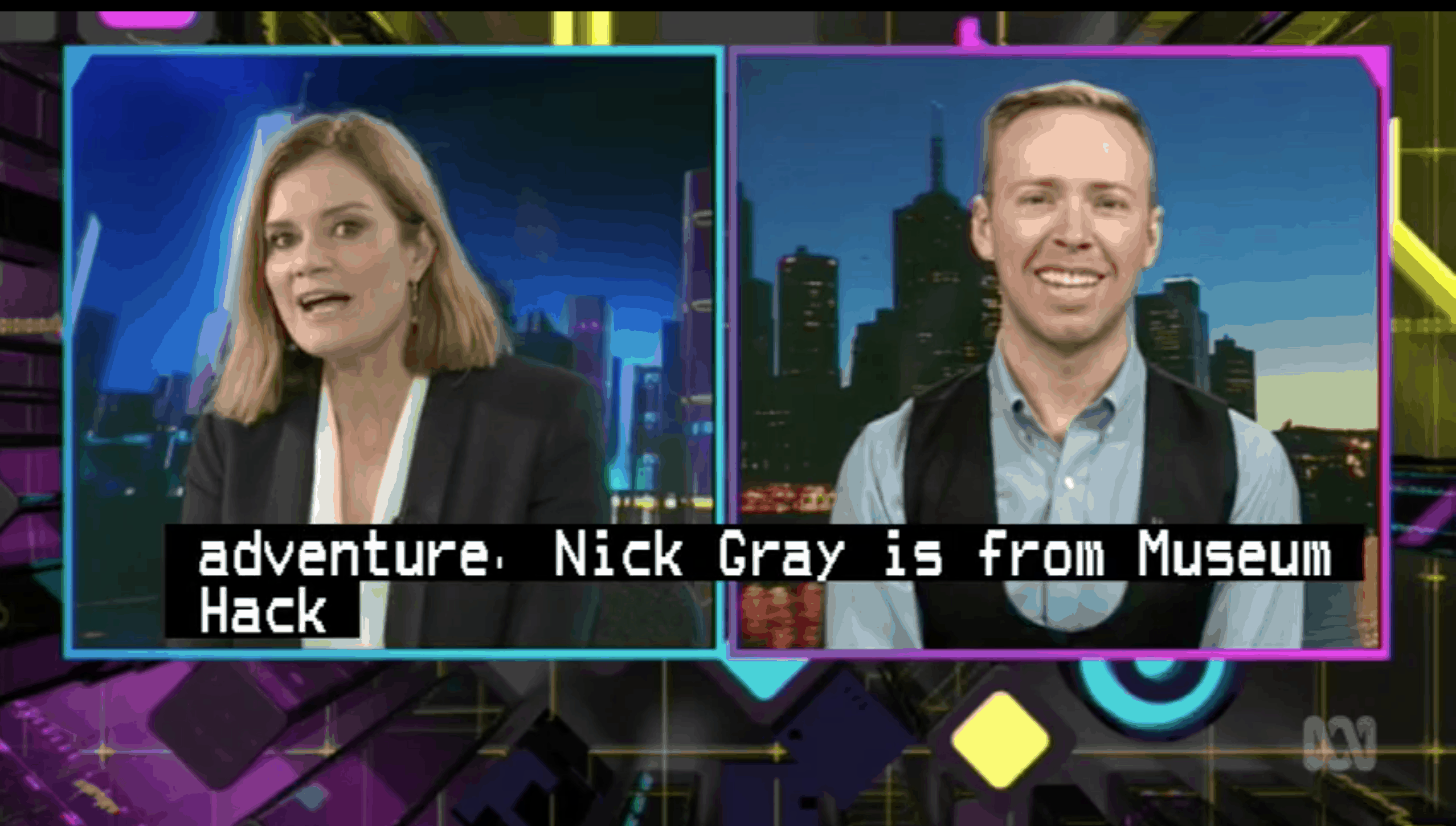 I was interviewed on live TV and radio in Australia about Museum Hack for my speaking and presentation at the Victoria Creative State Summit.

I was a guest on a program called The Drum on ABC (Australian Broadcast Corporation). This is a national news program that talks about current affairs. It airs right at the primetime, meaning there were millions of people watching. What’s up Australia fam!

The TV show is filmed in Sydney. Since I’m in Melbourne, they connected me from their studio via a live video link.

I was nervous to do the TV interview because I’d never actually been on live television before. Plus, I couldn’t see anyone. I had a little earpiece that I used to hear them and then had to stare at a black screen. That part was pretty nerve-racking!

I made this video diary showing how this all came about and what it looks like in the studio.

If being on the live national news wasn’t crazy enough, I was also speaking to a largely traditional audience about a pretty controversial subject: renegade museum tours that are f****ing awesome! And why more people should go to more museums more often.

The television anchor was very sharp and asked me good questions. I was worried that I would get a curve-ball, or get attacked for being a renegade. But it was good.

I haven’t watched myself from the video yet, but I bet I should have smiled more or been more careful with my body language.

I’m here in Melbourne with a conference called Creative State Summit. They linked me up with an amazing PR team. I was featured in Time Out Melbourne, The Herald Sun, another newspaper that I forget, and on ABC’s TV and radio. I’ve never had this much media at any of my prior speaking engagements.

The radio interview went well. Warren, the host, had guests call-in and tell us about their favorite museum. That was unexpected but also exciting. The first person talked about a Penis Museum in Iceland. I was surprised he got past the call screeners. But it is a part of the human anatomy.

Now I am going to meet Terri who is my press contact here and I am very excited about that. Let’s go! Okay, I just met up with Terri. This is Terri. Hi! Hello! What’s the name of your PR company? Pitch Projects. Now we are going to the media. We are, let’s do it! This is where we are going now. Okay, Let’s go.

I am going to talk to that guy on that show. Okay, I am here with Warren and I am in the stage and we are about to do a live interview on ABC. The interview was great. We talked for 10 or 15 minutes and even had radio call in guests which was pretty cool. People got to call in and tell us about their favorite museum. Thank you for having me! This is the producer. Thanks for having me!

Alright, we just finished the radio and now we’re going to the TV on ABC. We are rehearsing and preparing now for the television one which is going to be a lot more intense and I am going to be on a video monitor and what’s my advice? How should I do it? Oh, I have to pronounce it Mel-bon. Not Melbourne which I said like a bozo. Don’t look at yourself, look at the camera. I always look at myself! Look at the camera, okay.

This is the show I am going on called “The Drum.” Hello, I’m Nick! Alright, I am coming in the studio. This is going to be the studio I am going to go in. Wow! Okay, cool.

Alright Facebook Fam! This is Nick Gray coming at you live from Melbourne, Australia. I’m in a TV studio right now, I’m going to just give you a little look around here and I’m about to go live on television as part of my work here with the Victoria Creative State Summit talking about Museum Hack and why I think museums are awesome! This is the first time I’ve ever done this. I have an earpiece here and I can hear the TV studio and I’m going to be one of the talking heads and I’m excited about this and I’m excited to preach the gospel of everything museums being freaking awesome.

What else can I tell you? Terri is in the back and she’s helping me with PR. Hi Terri! And then was it Paul? Peter! Peter’s over here and is helping with the technician stuff and then this video…what is this sky scene behind me Peter? That is the Melbourne skyline on the Yara river.

This is Nick Gray reporting live from Melbourne, Australia. Thank you for watching! Hi Facebook friends!

Okay, we’re leaving the studio now. I just finished. Bye bye! Alright, I finished my TV interview and it was very exciting. I’ve never done something like that before where I had the mic. I’ll try to get footage of it tomorrow. Thank you for watching my very first day in Melbourne. Have a great night! Bye.